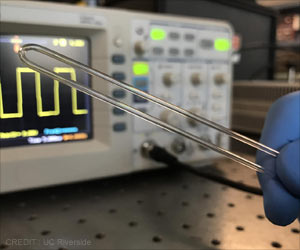 An innovative piece of glass tubing may be useful to weigh things. The glass tube sensor can speed up the chemical toxicity tests and shed light on plant growth, new biomaterials and other applications.

The research, led by William Grover, assistant professor of bioengineering in UC Riverside's Bourns College of Engineering, and Shirin Mesbah Oskui, a doctoral student in Grover's lab who recently graduated, was published today in the journal PLOS ONE.

A University of Missouri researcher says that it may soon be possible to detect cancer or diabetes using breath or urine samples.
Advertisement
‘A simple and innovative glass tube sensor measures the weight of microgram-sized biological samples in fluid. It also helps to speed up the chemical toxicity tests.’

The paper describes the development of a simple, inexpensive sensor to measure the mass, volume, and density of microgram-sized biological samples in fluid. The research has important applications in toxicity research as well as many other areas, including developmental biology, plant sciences, and biomaterials engineering.


While weight is one of the most fundamental and important measures of an object, weighing tiny biological samples in their native liquid environments is not possible with conventional scales. To change that, Mesbah Oskui developed a sensor comprising a small piece of glass tubing bent into a "U" shape and attached to an inexpensive speaker.

Researchers have developed a new portable device that can speed up screening of cells for leukemia or HIV using a biochip which can produce 3D focusing of a stream of cells.
Advertisement
The speaker vibrates the glass at its resonance frequency, which is a function of the overall mass of the tube. When a sample is pumped into the tube, the resonance frequency changes, allowing the sample's mass, density and volume to be calculated. The research expands a technique originally developed at MIT for weighing single cells. By opening this technique to larger samples, the research vastly increases its applications.

As proof of concept, the researchers turned to an important research area: toxicology. Many chemicals in use today are yet to be fully evaluated for their risk to human health and the environment, primarily because toxicology tests on traditional animal models are expensive, time consuming and labor-intensive.

While the introduction of tests using tiny, fast-developing zebrafish embryos is speeding things up, until now, scientists haven't been able to weigh the embryos in their native fluid environment. In the paper, the researchers used the sensors to measure mass changes in zebrafish embryos as they reacted to toxic silver nanoparticles.

"Zebrafish embryos are becoming an important toxicological model species, but until now scientists have not been able to include a very simple measure of health--the organism's weight--in their panel of measurements. Our research changes that, which will further expand the use of this model in helping protect human health and the environment," Mesbah Oskui said.

Also in the paper, the researchers described using the sensor to measure density changes in seeds undergoing rehydration and germination, and degradation rates of biomaterials used in medical implants. Heran Bhakta, a graduate student in bioengineering, led the work on biomaterials degradation.

"Biodegradable materials can be used to cover a wound after surgery, but if they degrade too quickly they can leave an open wound and if they don't degrade quickly enough they can cause complications," Bhakta said.

"Previously, tracking the degradation of biomaterials in a fluid environment has been a painstaking and error-prone process in which the biomaterial sample must be removed, cleaned, weighed and replaced on an ongoing basis. In contrast, our sensors enable us to measure the degradation of even the tiniest biomaterials samples continuously as they break down in a biological fluid," Bhakta said.

Grover said the automation, portability and low cost of the technique make the sensors well suited for applications in the field or in resource-limited settings.

"Our technique is so versatile because all objects have fundamental properties like weight. I am excited to see how the sensors will be used by other researchers to address scientific problems in many other fields," he said.

People who are considered at low or moderate risk of cardiac problems can now use a simple, non-invasive finger sensor test to know their chances of future heart events, such as heart