Innocent People can be 'Convinced' They Committed Crime 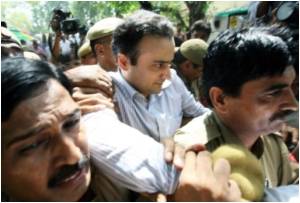 People can be easily convinced that they committed a crime that never happened, reveals a new study.

Evidence from some wrongful-conviction cases suggests that suspects can be questioned in ways that lead them to falsely believe in and confess to committing crimes they didn't actually commit.
Advertisement

Research at the University of Bedfordshire provides lab-based evidence for this phenomenon, showing that innocent adult participants can be convinced, over the course of a few hours, that they had perpetrated crimes as serious as assault with a weapon in their teenage years.


Lead researcher Julia Shaw said that the findings show that false memories of committing crime with police contact can be surprisingly easy to generate, and can have all the same kinds of complex details as real memorie.
Advertisement
Shaw added that all participants need to generate a richly detailed false memory is 3 hours in a friendly interview environment, where the interviewer introduces a few wrong details and uses poor memory-retrieval techniques.

Of the 30 participants who were told they had committed a crime as a teenager, 21 were classified as having developed a false memory of the crime; of the 20 who were told about an assault of some kind (with or without a weapon), 11 reported elaborate false memory details of their exact dealings with the police.

A similar proportion of students (76.67 percent) formed false memories of the emotional event they were told about.

Intriguingly, the criminal false events seemed to be just as believable as the emotional ones. Students tended to provide the same number of details, and reported similar levels of confidence, vividness, and sensory detail for the two types of event.

Shaw concluded that understanding that these complex false memories exist, and that "normal" individuals can be led to generate them quite easily, is the first step in preventing them from happening and by empirically demonstrating the harm "bad" interview techniques - those which are known to cause false memories - can cause, we can more readily convince interviewers to avoid them and to use "good" techniques instead.

The research is published in Psychological Science.

Drinking Alcohol While Pregnant is Not a Crime: UK Court
Heavy drinking during pregnancy should not be considered a "crime of violence" against a child, a .....

Adolescents Scared of Crime Less Suitable to Become Criminals: Study
Adolescents who are more frightened of crime are less suitable to become victims and culprit of ......