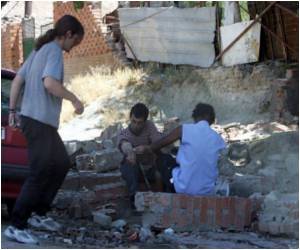 The use of intravenous drugs has decreased in most European countries although Bulgaria and Slovakia bucked the trend, according to a report published Thursday by a Lisbon-based monitoring body.

Data shows "that injecting drug use is declining in many countries, as are rates of new HIV infections among drug users," said European Monitoring Centre for Drugs and Drug Addiction chief Wolfgang Gotz.

The centre added in a statement that there was a "statistically significant" decline between 2002 and 2007 among heroin users entering treatment for the first time in 10 countries.


"Only two countries, Bulgaria and Slovakia, bucked the trend with statistically significant increases," it said in the report released ahead of the June 26 International Day Against Drug Abuse.

Drug Abuse Screening Test (DAST) is a screening test to find out if you need professional help with 'Drug Abuse' problem. This is only an anonymous self test.
Advertisement
"The highest levels of injecting among this group are reported from countries that entered the EU in 2004 or later," it added.

Data from 12 EU member states suggested there were about 2.5 intravenous drug users per 1,000 people aged 15-64, the centre said, adding this meant there were 750,000 to one million injecting drug users in the European Union.

It added that "in the EU Member States, the rates of newly diagnosed cases of HIV infection among injecting drug users are mostly at stable and low levels, or in decline."

Gotz said the downward trend could be "linked to sound investments made in effective prevention, treatment and harm-reduction measures which now reach many more of those in need."

Survey Reveals Increase in Prescription Drug Abuse by US Teens

One in five US high school students has abused prescription drugs, including powerful medications such as OxyContin and Percocet, a study published Thursday shows.
Advertisement
<< Risk of Migraine is High for Abused Kids
Novel Diagnostic Tool to Check for Bladder Cancer >>