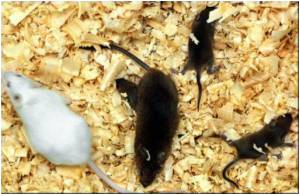 Tinkering with a molecular pathway that governs how intestinal cells respond to stress may help mice survive a normally fatal dose of abdominal radiation.

This is according to a new study by researchers at the Stanford University School of Medicine. Because the technique is still partially effective up to 24 hours after exposure, the study suggests a possible treatment for people unintentionally exposed to large amounts of radiation, such as first responders at the Chernobyl nuclear disaster in 1986.

"We were very surprised by the amount of protection the animals received," said Amato Giaccia, PhD, professor of radiation oncology. "The important thing to note is that we didn't change the amount of damage the intestinal cells sustained as a result of the radiation; we simply changed the physiology of that tissue and how it responded to that damage."


The researchers believe that a similar approach may also help those patients suffering from diarrhea and nausea caused by radiation therapy for cancer.
Advertisement
Giaccia, who is also a member of the Stanford Cancer Institute, is the senior author of the study, which will be published May 14 in Science Translational Medicine. Postdoctoral scholar Cullen Taniguchi, MD, PhD, is the lead author of the study.

The researchers were studying a molecular pathway involved in the response of cells to conditions of low oxygen called hypoxia. Hypoxic cells produce proteins known as hypoxia-inducible factors, which help the cells survive the stressful conditions. (The HIF proteins - HIF1 and HIF2 - are normally degraded quickly when oxygen levels are normal.)

Hypoxia often occurs in fast-growing solid tumors as cells find themselves far from oxygen-delivering blood vessels, but it can also occur during times of inflammation, or in tissues like the intestine that experience natural gradations in oxygen levels. HIF proteins help the intestine absorb needed nutrients while blocking the entry of pathogens and maintaining healthy fluid exchange.

"Previous studies from our group and others have suggested that the HIF proteins are important in protecting cells from many types of stress," said Giaccia, who is also the Jack, Lulu and Sam Willson Professor. "So we wondered whether stabilizing HIF proteins, and therefore increasing their levels within the cells, could also protect the intestine from the effects of radiation."

Radiation kills cells by irreversibly damaging their DNA. Side effects of acute radiation exposure are seen most clearly in rapidly dividing cells, such as those found in the lining of the intestine or blood and immune cells in the bone marrow. People who have undergone exposure to high levels of radiation typically experience debilitating nausea, vomiting and diarrhea when their intestines lose the ability to properly regulate fluid exchange. They are also extremely susceptible to infection. Although radiation's effects on the bone marrow can be mitigated by a bone marrow transplant, there's no treatment for its effects on the gastrointestinal tract, which are a major source of mortality in unintentionally exposed humans.

The scientists blocked the degradation of the HIF proteins in two ways: First, they genetically engineered mice unable to express a group of three proteins that tags the HIF proteins for destruction. They also treated unmodified mice with a small molecule called dimethyloxyallyl glycine, or DMOG, that inhibits the activity of the same group of proteins.

In both cases, the researchers found that the levels of HIF1 and HIF2 proteins increased significantly. Furthermore, 70 percent of the genetically modified mice lived for at least 30 days after receiving a normally lethal dose of abdominal radiation, and 27 percent survived at least 30 days after a normally lethal dose of whole-body radiation (a situation which more closely mimics accidental human exposure). In contrast, none of the unmodified mice survived more than 10 days after either type of radiation exposure.

Similar results were seen when unmodified mice were treated with DMOG prior to radiation exposure. In this case, 67 percent of the treated mice survived for at least 60 days after receiving a normally lethal dose of abdominal radiation, and 40 percent lived for at least 30 days after a normally lethal dose of whole-body radiation. As with the genetically modified mice, none of the untreated mice in either group lived longer than 10 days.

Further experiments showed that HIF2, rather than HIF1, is responsible for the radioprotection observed in the study.

To investigate the cause of the treated animals' longer survival, the researchers looked directly at the epithelial cells lining their intestines. They found that treated animals exhibited lower levels of cell death in response to abdominal radiation exposure and improved survival of a gland called a crypt, which hosts the rapidly dividing stem cells necessary to accommodate the intestines' need for repeated cell turnover. The treated animals also experienced less diarrhea and fewer imbalances in fluid and electrolyte levels than did untreated animals exposed to the same dose of radiation, and they quickly gained back the weight they had lost as a result of the exposure.

"The animals that survived the abdominal radiation have a life span that is similar to unexposed animals, which was very exciting to us," said Giaccia. "However, we realized it would be impossible to pretreat humans unexpectedly exposed to large amounts of radiation like at Chernobyl or Fukushima because those exposures are, by nature, unpredictable."

"We found we were still able to rescue a significant proportion of the animals," said Giaccia.

Finally, the researchers tested the effect of DMOG treatment 24 hours after total body irradiation. They found that 37.5 percent of the treated mice survived for at least 30 days, but only if the mice were also given a bone marrow transplant to restore blood and immune stem cells killed by the radiation. None of the untreated mice lived beyond 10 days.

Although the study suggests a possible way to mitigate the effects of therapeutic radiation exposure, much work remains to be done, the researchers caution. For one thing, mice are more resistant to the effects of radiation than humans, and the radiation doses used in the study far exceed what would be used to treat a cancer patient. But the next steps are clear.

"There are a number of drug molecules that act in a manner similar to DMOG that are already in clinical trials for unrelated conditions," said Giaccia. "Our next step will be to test some of these molecules to see if they also offer radioprotection."

Source: Eurekalert
Advertisement
<< Study Shows Hope for Normal Heart in Children With Fatal He...
Temporary Tattoos Could Cause Allergic Reactions >>

Psychological Intervention can Help Women Deal With Stress During Breast Cancer Surgery
Women who are struggling to cope with the stress of breast cancer diagnosis and surgery can benefit ...

Mindfulness Training can Help Soldiers Overcome Stress of Combat
Soldiers with US Marine Corps can prepare for and overcome stressful combat situations through ......

Stress is the Number One Risk Factor in Indian Employees
A new study suggests that stress is the number one lifestyle risk factor, ranking above physical ......

People Choose to 'pre-crastinate' to Get Relief from Stress
People often opt to begin a task as soon as possible just to get it off their plate, even if they .....