Influx of Foreign-trained Medics in UK 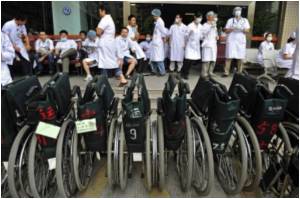 The flow of foreign-trained medics in the United Kingdom can put patients' lives at risk because some may lack good English language skills, warns experts.

The warning comes after a survey by the General Medical Council found that only 37 percent of the 240,000-strong medical register declared themselves as white British.

Visiting doctors seems an unpleasant experience for African American men. A majority of them said they do not go to the doctor because visits are stressful.
Advertisement

Separate figures revealed that over 88,000 of that number were trained abroad.

The strike by the post graduate (PG) medical students of government medical college hospitals (MCH) had entered the third day yesterday.
Advertisement
"If a patient calls an out-of-hours doctor, they are grateful to see any doctor, but they know it won't be a British one," she added.

Tory MP Dr. Sarah Wollaston said that there was growing unease over the number allowed to work in the country without any checks.

"We have many safeguards against bad medical practice, but these seem not to adequately address the issue of doctors from the EU with poor English," Wollaston said.

"You can practise here from Australia and have to take a test, but from Poland no language test may be applied under EU regulations," she added.

The National Health Service (NHS) currently has over 25,000 doctors from India.

Australia Could Deport Haneef Without Trial

Indications are that Dr.Mohammed Haneef, the Indian doctor, detained in connection with the failed Glasgow bombing, might be deported without any trial.
Advertisement
<< 1 in 8 Women Will Soon Develop Breast Cancer
Nanoparticles in Detecting Blood Clots >>