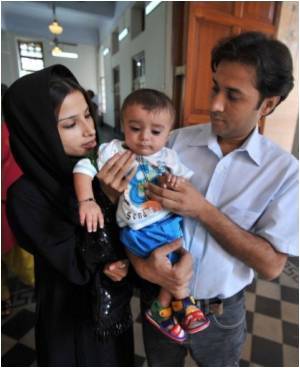 Sickened with grief and riddled with cancer, Nazima Bibi died 10 days after a woman snatched her five-year-old daughter from a busy hospital waiting room in Pakistan's capital.

The 35-year-old housewife had been sitting on a bench with her baby son and daughter Rabiea in the reception of Islamabad's main public hospital when the girl was led away by a woman into a noisy crowd.

Infertility to be Resolved With Womb Transplant

With womb transplants soon to become a reality, scientists assure infertile women of their ability to conceive.
Advertisement

Bibi said she was too weak to give chase or shout as her daughter was stolen, and was then forcibly admitted to the Pakistan Institute of Medical Sciences for cancer treatment. In grief, she refused to eat, and finally died.


"I don't want to live without my daughter. Please give me back my daughter and I will forgive that criminal lady, otherwise I will die in this hospital," she told AFP before her death.

The demand for infertility treatment is on the rise in Europe, but the regulations governing it are complex, it was pointed out by experts.
Advertisement
"My Rabiea, where is my princess Rabiea? I can't drink water, I can't eat without her, I only want to see her," she screamed from her hospital bed.

Officials say infertility is often the motive for a worrying trend of baby theft across the conservative country, where married women across the social spectrum are under pressure to bear children.

"The general trend of kidnapping and abduction in the country is on the rise. There are more reports of newborn babies stolen from hospitals," says Nazir-ul-Hassan, deputy director of the National Police Bureau.

But he says police keep no official data of the crimes.

The Edhi Foundation, Pakistan's best-known charity, estimates that about 40 newborn babies were stolen from hospitals last year, up from 30 in 2009, according to figures collated from parents' reports at its centres nationwide.

AFP rang around hospitals in seven major cities, which reported a total of 16 cases of baby theft in 2010. Pakistan's population is around 170 million.

"In most cases, the thieves are women who are infertile and want to satisfy their husbands and family," says Masood Safdar, spokesman for the District Headquarters Hospital in Rawalpindi, where another baby was stolen last year.

"They deceive them by saying they gave birth, but in fact they steal the baby from the hospital," he adds.

Naima Hassan, a UN stress counsellor in Pakistan, says criminal gangs are often involved in carrying out the kidnappings.

"There are various motives, but the main one is infertility -- women who steal babies to avoid a risk of divorce from the husband," she concurs.

In another case, Rukhsana Parveen gave birth by Caesarean section to her daughter Fatima in Rawalpindi a year ago, but woke from anaesthesia to find her newborn daughter had gone missing from the bed.

"I went crazy, like I was out of this world," says Parveen.

In a fortunate twist of fate, Parveen was reunited with her daughter a year later when the woman who took Fatima brought her along when she tried to steal another boy from the same hospital.

Security guards closed the gates as soon as the newborn boy disappeared and the authorities tracked down the woman attempting to flee -- recovering the baby boy and 14-month-old Fatima.

"The time when she was not with us was like a living hell. We prayed a lot to get her back and we thank God we have been reunited," says Fatima's father Ghulam Razik.

The hospital's spokesman Safdar says security has been strengthened.

"Baby stealing incidents happened in the past but now we have tightened up security," says Safdar.

Hospital administrators say, however, they are unable to completely secure their grounds.

They insist that mothers show identity cards and special passes before taking babies from hospital wards, but outside areas still put children at risk of criminal gangs.

"There are dozens of deliveries every week. What can we do if a baby is taken outside and then stolen from the mother?" says Raja Shafique Sarwar, spokesman for Holy Family Hospital in Karachi.

Infertility Not to be Evaluated by At-home Tests

Assessing infertility through at-home tests may not identify correctly the women who will have trouble getting pregnant.
Advertisement
Advertisement

Sexual problems occur in males as well as in females. Drugs affecting the nervous and our endocrine or ...

Infertility is a condition wherein couples fail to achieve pregnancy or if the woman has been unable to carry ...

Polycystic ovarian syndrome is the most common hormonal disorder among women of reproductive age and can ...