Infants Emotions and Attention are Shaped by the Beats They Hear 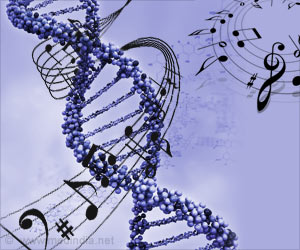 Lullabies soothe both moms and babies simultaneously, while playsongs increase babies' attention and displays of positive emotion toward their mothers, according to the Cognitive Neuroscience Society.

The behavioral implications of music are vast, says Laura Cirelli of the University of Toronto Mississauga, who is presenting the new work on maternal singing at the 25th meeting of the Cognitive Neuroscience Society (CNS) in Boston today. "Infant brains must be able to track auditory events in a predictive manner to make sense of music," she explains, and many complex things are going on in their brains to make that possible.

Advertisement
‘Infants emotion and attention are altered by music with rhythmic qualities, with higher beat salience correlating with great attention.’

From infancy to old age, music demands much from the human brain. Learning more about how we process music is helping scientists better understand perception, multisensory integration, and social coordination across the lifespan. Technological advancements - for example, more portable electroencephalography (EEG) and electrophysiology set-ups and- are allowing cognitive neuroscientists to study music in a variety of situations, from mother-child interactions to live concert halls.


"Music and rhythm are human universals but do not appear to be shared by most other species," says Jessica Grahn of the University of Western Ontario who is chairing the CNS session on musical rhythm and who co-authored a new study of live music and brain rhythms. "Rhythm in particular is mysterious: We are sensitive to the 'beat' - that steady, underlying pulse that we tap our foot or bob our head to - from early in life. But, even after decades of trying, 'beat-tracking' algorithms can't approach anything like the automaticity and flexibility that humans show to feel the beat across different speeds, genres, and instruments."
Advertisement
Music for mom and baby
While working at a daycare one summer as an undergraduate student, Cirelli was at a playground when a 2-year-old girl asked her for help down the slide. The rest of the toddlers saw this, looked at each other, and excitedly ran over to line up and wait their turn. "I was amazed at the complexity of their social understanding at an age where they can't even tell us what they are thinking," she explains. This sent her down the path of exploring how sociality develops at a young age, and as a piano player and ballerina, the natural fit was to use music as a way to understand the social brain.

In her new study on lullabies, Cirelli and colleagues investigated how mothers adjust their infant-directed singing depending on their goal, to be soothing or to be playful. The participating mothers repeatedly sang Twinkle Twinkle to their babies who were sitting in a highchair facing them. The mothers alternated between singing in a playful way or a soothing manner. At the same time, researchers were tracking the mothers' and babies' arousal responses, measured through skin conductance and behavior. "When we are excited or stressed, arousal levels increase," Cirelli explains. "When we are calm, they decrease."

The researchers found that the moms' arousal levels were higher during playful compared to soothing song. And they found coordinated decreases in arousal for both the moms and babies as the soothing songs progressed. In the playful conditions, the babies' arousal levels remained stable and their attention to mother and displays of positive emotion increased. "The findings show the physiological and behavioral changes by mom and baby to different song styles."

This study builds on a growing body of work about the social implications of musical engagement with others. Cirelli points to past studies showing that when people move together in synchrony, they feel socially connected and are later more likely to help and cooperate with one another. And in a study of toddlers, she and colleagues had similar findings: 14-month-olds who bounced synchronously with unfamiliar adults helped those adults substantially more by retrieving dropped objects than those who bounced with them asynchronously. "Music is a tool that we can use to bring people together, and this starts in infancy."

Music for a live audience
Despite being able to listen to music from virtually anywhere in modern times, people will still pay hundreds of dollars for the opportunity attend a live musical performance. Why? This question helps drive forward the work of Grahn and Molly Henry, both of the University of Ontario.

In new work she will be presenting at the CNS meeting today, Henry used the LIVELab at McMaster University to test how the presence of live performers and an audience changes the experience of concert-goers at a neural level, Specifically, she and colleagues looked at brain rhythm synchronization.

A live band played in front of 80 people, 20 of whom were having their brain activity recorded with EEG. They then compared those EEG measurements to those in two other conditions: one, in which 20 audience members were watching a recording of the first concert on a large movie screen with audio identical to the live concert; and another in which 20 participants in small groups of 2 were seated apart while they observed the recorded musical performance. "Thus, we manipulated the presence of the performers while keeping audience context fixed," the authors explain.

"I was extremely excited to see that across the live audience, brain rhythms were synchronized in exactly the frequency range that corresponds to the 'beat' of the music, so it looks as if the beat is driving audience brain rhythms," Henry says. "That may seem common sense, but it's really something. These are novel findings in the context of live music listening that are providing insights into the more social side of music listening."

Music for the future
Moving forward, Henry says that the biggest challenge for studying musical rhythm is that "there's so much other stuff tied up in the experience of music and rhythm listening or performing. Music makes us want to move, it elicits emotions, it triggers memories." Teasing apart these influences will require creative stimulus and experimental design combined with integration of converging evidence across lots of different studies.

In the meantime, Grahn says: "We are seeing relationships between rhythm and language abilities, attention, development, hearing acuity, and even social interactions. Every sensation we have or action we make on the world unfolds over time, and we are now beginning to understand why humans are sensitive to certain types of patterns in time, but not others." Understanding these patterns will inform not only basic science, she says, but also potential music-driven therapies for patients suffering from neurodegenerative diseases.

Source: Eurekalert
Advertisement
<< Child Sexual Abuse is a Costly Crime in America
Antibiotic Use Provides Harmful Bacteria With the Conditions... >>