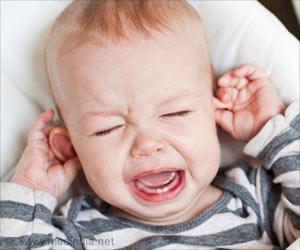 Infant fussiness is a common complaint, especially among first-time mothers. What is the actual reason behind this fussiness?

Penn State College of Medicine researchers find that 'how happy a mother is in her relationship and the social support she receives may affect the risk of infant colic.'

Social conditions related to mental health during pregnancy, such as maternal anxiety and low social support, have previously been associated with infant colic. Researchers have also linked postpartum maternal depression with an increased risk of colic.

The study measured first-time mothers' relationship happiness and general social support, as well as support in taking care of the baby by their partners. The researchers, who reported their findings in a recent issue of Child: Care, Health and Development, looked at these factors during pregnancy and one month after birth in more than 3,000 women, 18 to 35 years old, who gave birth at 78 hospitals in Pennsylvania between January 2009 and April 2011.

Tear-based microfluidic strips or devices may show new hope in testing nutritional deficiencies, reveals study.
Advertisement
Overall, 11.6 percent of mothers in the study self-reported that their infants had colic, defined as crying or fussiness three or more hours a day.

Relationship happiness, general social support and partner-baby support all protected against colic in the study. The happier a woman reported being in her partner relationship during and after pregnancy, the lower the risk of colic in her infant. This was the strongest association and held even in women experiencing postpartum depression and in those whose partners were not their babies' biological fathers.

The researchers said it is unknown why this association exists, but offered a few suggestions. "If you don't have a partner you can still have lots of social support, lots of love and lots of happy relationships, and all of that's going to be better for the baby," she said. "Love makes a difference."

The first author of the study, Chandran Alexander, assistant professor of pediatrics at Penn State College of Medicine, said, "Mothers' significant others have a role to play in reducing the burden of colic. Society should avoid pinning the blame for colic on mothers' competence, self-esteem or depression."

Larger The Loss in Well-Being Among Couples, Smaller the Probability of a Second Baby

Couples who perceive a drop in happiness in the first year after they became parents have a lower probability of having a second child in their life.
Advertisement
<< Dangers of Indoor Tanning Perceived Through Images of Skin C...
Financially Stressed Pregnant Women Give Birth to Smaller Ba... >>

More News on:
The Magic Feeling of Being A Mother Celebrating Life: Positivity and Rejoicing Top Thirty Quick and Easy Health Tips Euphoria