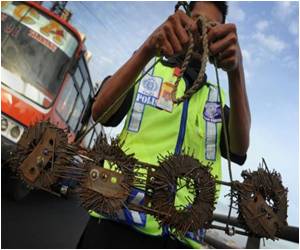 Workmen from an Indonesian timber company fell a tree with a chainsaw, stick a red tag with a serial number onto it and attach a corresponding stub to the stump deep in the forests of Borneo island.

This is all part of an arduous auditing process, one of many government attempts to clamp down on illegal logging and clean up one of the country's most corrupt and mismanaged sectors as Western countries demand proof their timber imports are legal.

Following an agreement signed with the European Union in September, Jakarta is rolling out a system under which companies holding government-issued permits are given a certificate to prove their wood is harvested within the law.


Indonesia, Asia's leading exporter of timber to the EU, is hoping the pact will help it double timber exports to Europe to the tune of $2 billion a year.
Advertisement
But critics say logging permits considered legal are often obtained through illegal means, and laws passed in Europe, the US and Australia to give consumers a clear conscience do little to tackle under-the-table transactions that compromise the sector.

?This system is basically asking, do you have a permit, and if you do, that box is ticked. It?s saying anything that the government does is considered legal,? said Emily Harwell, lead author of "The Dark Side of Green Growth", a recent report by Human Rights Watch.

"It is silent on corruption."

Indonesia is rapidly losing its forests, mostly to make way for plantations for timber products such as paper and palm oil.

According to a map released by Google Earth in November, two million hectares (20,000 km2) are lost annually, the equivalent of 10,000 football fields every day.

The forestry ministry is considered the country's most corrupt institution, according to a 2012 survey by the country's respected Corruption Eradication Commission (KPK), which found permits being bought from officials with bribe money was the most common act of corruption.

Timber companies in Indonesia, which has the world's third-largest expanse of rainforests, are legally obliged to comply with strict guidelines before being granted permits, such as carrying out environmental impact assessments and consulting communities affected by their operations.

But permits are handed out even when such requirements are not fulfilled, critics say, while even government data shows only 16 percent of such permits have been through the process of consulting affected communities.

Law enforcement is not only lax, it is often part of the problem. In May, mid-ranking police officer Labora Sitorus was arrested for allegedly running a $150 million illegal logging ring in the remote, eastern Papua region -- seen as Indonesia's last bastion of vast untouched rainforest.

Sitorus was caught after state financial auditors linked him to 115 containers of illegally-logged timber in Surabaya on Java island, a hub for hand-made furniture exports.

Critics like Harwell say this all means that even with Indonesia's new Timber Legality Assurance System, the mountains of cardboard packaging, dining tables and timber flooring being sent abroad with a stamp of approval are not necessarily legal at all.

Nevertheless there are some companies striving to ensure their timber is genuinely legal.

Sumalindo Lestari Jaya -- the timber company on Indonesian Borneo tagging its logs and tree stumps -- has spent years engaging with the local indigenous Dayak communities affected by its 60,000-hectare (150,000-acre) concession near the city of Berau.

The company shares the benefits of its harvests in cash handouts, school tuition for children and basic infrastructure with four of five communities affected by its operation, and involves them in operational decision-making.

"Sumalindo didn't at first engage with the communities. But they realised that by communicating better with them, they could come up with something fair that respects everyone's rights," said Joko Sarjito from WWF, which facilitated the agreements.

The company exports construction timber, wood panelling and timber flooring to Germany, Britain, the Netherlands, Australia and Japan, and it is hoping to qualify for a superior certificate from the Forest Stewardship Council (FSC), which also ensures sustainability and fair trade.

"To be honest, it doesn't really make financial sense to go for the FSC certificate. It's about 30 percent more expensive to produce, and the returns are only around five percent higher," Sumalindo board director Rudi Gunawan said.

While some big companies have the funds to venture into the brave new world of clean timber, artisan furniture makers have trouble even registering as a business, a basic requirement for a certificate of legality.

"In many cases, the artisan doesn't want to register formally. They are often asked for costly fees and they might not feel comfortable in that formalised environment," said Agus Djalaili, technical adviser for the Multistakeholder Forestry Programme funded by Britain's Department for International Development.

Sources in the industry said there have been several cases where artisans have simply bought certificates of legality and that the auditing process could be compromised.

The forestry ministry admits there is room for improvement in the new initiative, which is not set in stone until the agreement with the EU is ratified.

?We are still developing it and we are completing the text, so we are open to views from NGOs and we want to ensure our timber is truly legal,? said Dwi Sudharto, the ministry's director general of processing and marketing of forest products.

World's Rarest Rhino Gets a Sanctuary in Indonesia
The world's rarest rhino had left a trail of hoofprints in the soft mud on a leaf-covered dirt path ...

Indonesia's Illegal Dentists Oppose Ban
Indonesian dentist Edi Herman has been fixing the teeth of Jakartans in the rusty chair of his tiny ...

Bird Flu Claims Life of Indonesian Woman
The Indonesian health ministry has confirmed that a woman living near the capital Jakarta has died ....