Indonesia in the Grip of Japanese Cultural Influence 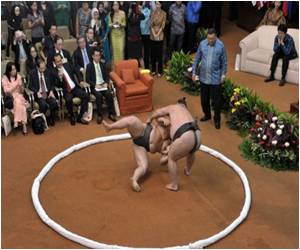 In an unusual scene in Jakarta, two sumo wrestlers charged at each other with full force, their bodies colliding with a tremendous smack that echoed through the arena.

The first official sumo tournament to be held outside Japan in five years saw wrestler Kotoyuki take an early advantage against his opponent with a series of quick stinging slaps to the chest and a steady push forward.

"I love sumo -- I've studied it, but this is the first time they've come to Indonesia and it's the first time I've seen it live," Julyana Antika, a 22-year-old student of Japanese literature at a Jakarta university, told AFP at the weekend competition.


Antika -- accompanied by a dozen Japanese exchange students from Takushoku University in Tokyo -- is just one of many young Indonesians who are increasingly consuming Japanese culture through entertainment, comics, fashion and food.
Advertisement
With money from her part-time job as a Japanese-Indonesian translator, Antika buys Japanese magazines, watches Japanese cartoons, uses a Panasonic digital camera and a Sony mobile phone.

Indonesians have come late to the party -- Japanese culture was embraced in the West in the 1970s and 1980s -- but a boom in Southeast Asia's top economy and Japanese firms' hunt for new markets have combined to create a recent upsurge in interest.

"Two years ago, when I first came to Indonesia, we had around 1,000 Japanese businesspeople coming to us for Indonesian market advice," said Kenichi Tomiyoshi, chief of the Japan External Trade Organsation's Indonesian operations.

Japanese firms are flooding in as the world's most populous Muslim-majority nation rides the wave of a prolonged economic boom that has produced an army of new consumers.

While growth has slowed this year, Indonesia remains a bright spot in the global economic gloom.

It also boasts a young population -- more than 40 percent are estimated to be 24 or under -- just the kind of demographic beloved of Japanese companies looking for new growth to offset saturated markets at home where the population is ageing and the economy is struggling to pull itself out of a long funk.

And as diplomatic tensions soar with neighbours and key trade partners South Korea and China, Japan has shifted its focus to the Southeast Asia region in general.

Japanese direct investment in Indonesia is a testament to the increased interest, having ballooned to $2.5 billion last year from $712.6 million in 2010, according to the Indonesian Investment Coordinating Board.

An array of Japanese cultural events -- such as the Toyota-sponsored sumo tournament -- are also being staged to give soft power support to Tokyo's push into the region.

This week, a large Japanese anime festival will take place in Jakarta.

Tokyo is also involved in such efforts, with the government backing the sumo showcase as an event to mark 55 years of diplomatic relations between Indonesia and Japan.

Many top-ranked sumo wrestlers from the highest "makuuchi" division took to the ring for the tournament, which was the first in one of the 10 Association of Southeast Asian Nation member states and in an Islamic country.

As more companies arrive from Tokyo to set up shop in Indonesia and the number of cultural events multiply, enthusiasm for all things Japanese among Indonesians grows.

Many are signing up to learn the Japanese language, with more than 870,000 taking lessons last year, up from some 700,000 in 2009, according to the Jakarta branch of the Japan Foundation, the country's main body promoting Japanese culture overseas.

It was once hard to find Japanese cuisine in Indonesia but sushi bars and Japanese restaurants now abound in major cities.

Even local firms with no links to Japan are also successfully capitalising on the frenzy.

Metrox Group -- a company owned by an Indonesian and Singaporean -- launched its own Japanese-inspired streetwear brand, Wakai Raifusutairu, which means "Young Lifestyle" in Japanese and uses Japanese script in part of its name.

The company -- which also distributes brands such as Timberland and Crocs in Indonesia -- hired a Japanese designer to create its main product, a colourful array of slip-on canvas shoes, some of which have Japanese prints on them.

"In terms of sales, we initially thought we'd break even in 10 months, but we did it in three," said Matrox Group brand manager Alice Dwiyani.

"The stocks we thought would last six months keep running out."

Last Year Smartphone Usage in Japan Almost Doubled
A recent survey has revealed that smartphone usage in Japan has nearly doubled over the past year .....