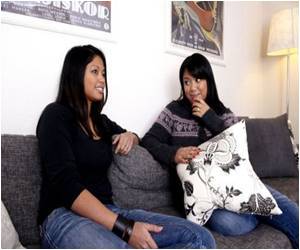 After 28 years, Indonesian twin sisters have been reunited in southern Sudan.

According to a DNA test the pair had done two months after reuniting in January last year, and which they shared with AFP, there is a 99.98 percent chance of them being sisters.


A complex string of events led up to that revelation.

Both were adopted from an orphanage in Semarang in northern Indonesia by Swedish couples, but there was no mention in either of their documents of the fact that they had a twin.

Multiple Pregnancy Calculator assesses your pregnancy symptoms and finds if you are pregnant with twins or triplets or more. Multiple Pregnancy Calculator offers tips for pregnant women.
Advertisement
When Backman's parents left the orphanage with her all those years ago, the taxi driver had turned around and asked them: "What about the other one, the sister?" and they jotted the girls' Indonesian names down on a piece of paper.

The name helped Backman's parents track down the Falks back in Sweden, and the two families got together a few times when the girls were babies to compare notes.

"They went through the adoption papers, but they didn't think we were very similar and there was a lot in the papers that didn't add up ... And there were no DNA tests back then," Falk said.

Among the discrepancies were different names for the girls' fathers. And although the records showed they had the same mother, the families eventually decided that this too was an error.

The two couples in the end wrote off the idea and eventually lost touch.

Although their parents had told them the story as children, both Falk and Backman later forgot about it. Growing up, neither was interested in information about their biological background, so they never asked.

"But when I got married two years ago I started thinking about family and my adoption, and when I asked my mother she told me this story again, and I decided to look for Lin," Falk said.

She had a name and began searching through a network for Indonesian children adopted by Swedish families, and found her on Facebook.

"I am born on March 18, 1983 in Semarang and my biological mother's name is Maryati Rajiman," Falk said she wrote, and quickly received the reply: "Wow, that's my mother's name as well! And that's my birthday!"

They found they had a lot in common.

They lived only 40 kilometres apart in the very south of Sweden, they are both teachers, they got married on the same day only one year apart and even danced to the same wedding song: "You and Me" by Lifehouse.

"It was really strange," Falk said.

"When Lin called me (with the DNA test results), I remember I was sitting in the car and when she told me I started laughing, because it just felt so strange," she said, adding: "I suddenly started thinking that we shared a womb. It was really strange, but really cool too."

Since then the two have kept in close touch, and have talked about going to Indonesia to search for their biological parents.

There are a number of details, some contradictory, in the adoption papers, including a reference to their father as a taxi driver.

"We are very curious if he is THE taxi driver," Falk said.

Asked if she wished she had found out about her twin earlier, Falk insisted "there's no use in being sad about something I didn't know about. I am only happy to have found her."

Pregnancy is a time when a female blossoms into a woman with an experience never felt before. Here are a few self-care tips for pregnant mothers that will help them during their pregnancy.
Advertisement
<< Motor Vehicle Deaths Among American Indians and Alaska Nati...
Future Generali Launches Income Plan >>

Brazilian Conjoined Twins Will Not Have Surgery for Now

It has emerged that for now, doctors in Brazil will not attempt to surgically separate a set of conjoined twins who have two heads but share one body
Advertisement
News A-Z
A B C D E F G H I J K L M N O P Q R S T U V W X Y Z
What's New on Medindia