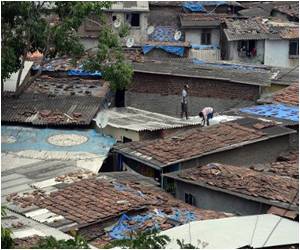 Gripping his inhaler as he struggles to breathe, rake-thin Chinnapan Chinnakannu blames his years spent laboring in one of India's scores of asbestos cement factories for his debilitating illness. When he first started at the factory in western Gujarat state, Chinnapan said he was given protective clothing "but later they stopped providing us with masks and shoes".

"Initially I suffered from breathlessness, but slowly the frequency increased and reached a point where I could hardly work," said Chinnapan, who was diagnosed with asbestosis, or scarring of the lungs, in 2007. "Slowly I started losing weight, I couldn't even drink water as it made me vomit immediately," the 64-year-old said in his one-bedroom house on the outskirts of Ahmedabad.

Asbestos Exposure Could be Responsible for Some Idiopathic Pulmonary Fibrosis Cases

Asbestos exposure could be the reason behind a portion of idiopathic pulmonary fibrosis (IPF) cases.
Advertisement

A pariah product in most of the West, blamed for thousands of deaths, asbestos is hugely popular in the developing world -- including in India, where it's a $1.4 billion growing industry.


Nations at a UN meeting in Geneva last month tried to add chrysotile, or white asbestos to a list of dangerous substances subject to export restrictions.

Policies and decisions that take years or decades to unfold can pose a challenge to global health.
Advertisement
But the move was blocked by leading asbestos exporter Russia and other developing nations, a stance supported by India, one of the world's biggest importers.

Activists and unions say India's government must start to recognize the dangers posed by asbestos, whose fibers doctors worldwide say lodges in the lungs causing cancer and other diseases.

More than 50 nations, including all members of the EU, have banned all forms of asbestos, which the World Health Organization says kills at least 107,000 people annually.

"The time has come to ban this product outright and India must see that. It's just too dangerous," said hazardous materials activist Gopal Krishna.

New Delhi defended its position in Geneva, saying there was "no proof" India's asbestos factories or their products -- used mainly in low-cost housing -- are unsafe.

"We took a call which looked pro-industry but this was done in the absence of credible data (on the health risks)," said Shashi Shekhar, India's top official in charge of hazardous materials and chairman of the Central Pollution Control Board.

Shekhar said he has commissioned a study into the possible health effects which would take up to two years to complete.

"The whole world is talking about it (asbestos) in a grave way, and so we have to see whether they are right or wrong."

In Ahmedabad, business is brisk at a huge warehouse where asbestos wholesaler Mansur Satani has little time to talk of health concerns, other than to say they don't exist.

"This is the peak trading period for the year," Satani said as the phone rang constantly in his office.

The industry and other asbestos supporters say curly-fibered chrysotile is safe, and only other forms with more jagged fibers are dangerous.

More than 50 factories throughout India use white asbestos as an ingredient in mainly cement roofing sheets, wall panels and pipes. More than 400,000 tons of asbestos is imported every year to feed the plants.

TK Joshi, director of the Center for Occupational and Environmental Health in New Delhi's Lok Nayak hospital, warned of huge consequences for the industry's workers.

"It could run into thousands (of sick). And that (figure) could rise exponentially in future as the use of asbestos in the last decade and a half has gone up considerably," Joshi said.

But he said exact figures on those already suffering were unknown because of poor record keeping. Many doctors treating patients were also unaware of the symptoms or did not think to ask about exposure to hazardous materials.

More than 300,000 workers are employed in the factories, while thousands more tradesmen install the products, bought at markets and warehouses like the one in Ahmedabad.

"Many cases go undiagnosed leading to an underestimate of the magnitude of harm."

Joshi said he was concerned about a lack of public awareness of asbestos dangers, and poor enforcement of safety laws.

The industry denied its employees were at risk, saying all precautions were being taken, including using machines to handle bags of asbestos to prevent fibers escaping into the air.

"That shows that these figures are meaningless and the health concerns are simply overblown," Nicodemus said.

Gujarat Composite, which runs the factory where Chinnapan worked, adhered to all government-mandated safety requirements, that none of its staff were sick and it was unaware of Chinnapan's case.

Raghunath Manvar, whose non-profit Occupational Health and Safety Association fights for worker compensation, said about 30 were known to be suffering asbestosis in Gujarat, where some 20 factories were based.

"Besides asbestosis, over 100 people are suffering from mesothelioma which is also due to exposure to asbestos," Manvar added.

After being diagnosed, Chinnapan said he fought a long battle for compensation from the state insurance scheme, and now receives 2,700 rupees a month ($42).

He also has a retirement pension from the factory, but with most of the money spent on medicines, Chinnapan must still work to feed his family, something he finds increasingly difficult as the illness takes hold.

"I did not understand what was happening to me. Now almost all my money is spent on medicines and doctors."

To protest against the authorities failure to clear workplaces of asbestos which may lead to fatal respiratory system diseases, thousands staged a die-in in Paris
Advertisement
Advertisement

Mesothelioma is a rare, aggressive and deadly cancer of the mesothelial tissue lining the internal organs and ...