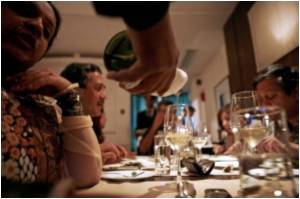 Indians are growing richer and adopting unhealthy lifestyles that could take years off their lives and threaten economic growth, said a study on Tuesday.

In a wide-ranging review of India's under-resourced health system published in the British magazine The Lancet, studies by a clutch of top doctors flagged some particular medical downsides linked to economic progress.

"Rapidly improving socioeconomic status in India is associated with a reduction of physical activity and increased rates of obesity and diabetes," said a paper on chronic diseases and injuries led by Vikram Patel from the Sangath Centre in Goa.


With more money in their pockets, Indians are exercising less, indulging in fatty foods and risking injury by driving more and faster on the country's notoriously dangerous roads, often under the influence of alcohol.

Prof Maria Fidela de Lima Navarro, president of the International Association for Dental Research, USA, has said that India needs to make big strides
Advertisement
"The emerging pattern in India is characterised by an initial uptake of harmful health behaviours in the early phase of socioeconomic development," Patel's paper said.

The scourges of the newly wealthy, whose ranks swell by millions each year, can only be tackled with education. The authors said bad habits decline once consumers become aware of risks to their health.

Overall in India, the poor remain the most susceptible to disease and are burdened by the effects of paying for care in a country whose health indicators lag behind its impressive economic growth figures.

The study also said it was vital that India, with its young and fast-growing 1.2 billion population, took steps to prevent injuries and illnesses such as heart or respiratory diseases, cancer and diabetes.

These problems, which suck up resources in hospitals and doctors' surgeries, can be reduced cost effectively through education, the use of drugs and patient screening, as well as higher taxation on tobacco and alcohol.

The study said India was in the early stage of a "chronic disease epidemic," with as many as one in five people suffering from a chronic illness, while one in 10 has more than one disease.

"Many chronic diseases can be treated with inexpensive generic drugs and lifestyle modifications," Patel's paper said. "And if action is not taken now, the avoidable suffering and deaths will have an adverse effect on economic development."

Other studies published in The Lancet urged India to do more to reduce inequality and to meet a target contained in the title of the series: "India: Towards a Universal Health-care System by 2020."

According to research led by S.V Subramanian from the Harvard School of Public Health in Boston, health costs push 39 million Indians back below the poverty line each year, with millions of others forced into even greater penury.

The authors were critical of Indian healthcare noting that payments by individuals account for 71.1 percent of spending on health, with insurance and the public sector taking up a very small proportion of the burden.

The review's seven studies, which were presented at a symposium in New Delhi on Tuesday, called on India to raise public health spending from 1.1 percent of GDP to 6.0 percent -- financed by new taxes on tobacco, alcohol and fatty foods.

"India's continued economic growth will be at risk if adequate steps are not taken quickly to invest in the health of its citizens," the authors said in a statement.

The studies on infectious diseases, reproductive health, chronic diseases and injuries, health care and equity, human resources for health, and financing healthcare can be found on The Lancet's website.

Diabetes has replaced every other condition to become the fastest growing lifestyle disease, globally. This disease also impacts children. Some people are more inclined to develop diabetes than others. Do you belong to the high- risk group? Spend 5 minutes to find out.
Advertisement
<< Ugg Boots Can Cause Infection
New Ways for Treating Huntington's Disease Uncovered >>