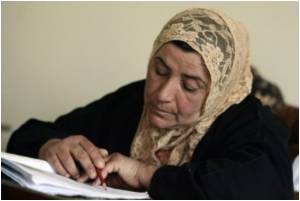 The elegant Indian scarf known as a "dupatta" is also an effective weapon to combat the unwanted attentions of men.

"Fling it over the attacker's neck, pull him, go for the final thrust and he will be thrown on the ground in front of your eyes," shouts a police officer as she demonstrates her moves at a civilian training session in New Delhi.

Scores of young girls and women applaud the display, and then learn for themselves how to fight back against "eve-teasing" -- the south Asia term for sexual harassment in public places.


Women across India are often victims of provocative remarks, aggressive male posturing and even physical assaults such as groping on the street and in crowded buses and trains.

Hair loss or Alopecia can be emotionally devastating to women but understanding reasons behind hair loss can help in prevention and treatment of hair loss.
Advertisement
According to the National Crimes Record Bureau (NCRB), 200,000 incidents of crime against women were reported in 2008.

But officials at the bureau admit that many -- perhaps most -- women refrain from reporting incidents due to the social stigma attached to being a victim of molestation or even rape.

"Come on women. Learn to shout, learn to object and learn to hit back," demanded Radha Sharma, a trainer at the state-sponsored self-defence workshop in Delhi.

Since it was set up in 2002, it has coached 70,000 women, from students to housewives, at ten-day free courses organised at school premises during the summer break.

Young girls in designer jeans and women wearing shalwar kameez robes or colourful saris are taught how to deploy their own possessions to defend themselves.

"Your pen can slash and dig into soft muscles, a hair pin can prick or a bag can push away the assailant -- or just use a loud reaction along with a punch against lewd men. All these things are useful," Sharma explained.

The message is clear: do whatever is necessary to avoid becoming a victim.

"Use your own strength to disorient and shock your attacker," she said. "Bite, claw, gouge, scream as loud as you can into his ear, clap his ears hard with your palms, kick in the knees, groin, leg or ankles."

Such aggressive action has become vital, Sharma believes, as Delhi consistently reports the highest number of rapes and other crimes against women among Indian cities.

With 396 cases of rape registered in 2008 by the NCRB, Delhi is often dubbed as India's "rape capital" by the national media. And such figures are thought to wildly underestimate the problem due to the reluctance to report attacks.

One self-defence student, Ritika Mohan, 18, admitted she was unable to respond to predatory approaches by men.

"Last month, when I was walking alone a man stopped his bike close to me and started forcing me to sit on the bike. I froze and started crying," said Ritika, who attended the workshop with her mother and two sisters.

"If it happened again today, he would not escape so easily," she said, explaining that the class had given her more confidence.

Private self-defence programmes have mushroomed in India's cities and small towns, challenging stereotypes that Indian women are passive and defenceless.

Dalal holds private classes of 12-15 students at the evenings and weekends, charging 3,000 rupees (65 dollars) for a six-day course.

"With the right skill and determination, any woman can defend themselves," she said.

"Why should I depend on someone to protect me," said Reema Rustagi, a 23-year-old woman at a training session in Delhi. "I have learnt to hit hard."

"My brother does not allow me to wear short skirts as boys stare at me. I hate such restrictions and want to be able to tackle such problems on my own."

In Kolkata, one retired army officer began to organise female self-defence courses after his daughter complained of sexual harassment by a schoolteacher.

Among his pupils, Captain Rammohan Ray found the culture of silence was a major problem.

"Indian women are often hesitant to discover their physical strength, so we offer step-by-step moves," he said. "I was shocked to find that most Indian women do not report attacks as it normally involves a close relative or a family friend."

His students are taught to use tools like pepper spray -- and even pocket knives.

But Kalpana Viswanath, a researcher at Jagori, a women's rights group, told AFP that self-defence was only one part of the fight for gender equality and justice.

She stressed the underlying cause of harassment needed to be tackled.

"These programmes do not solve the main problem. Women can learn, but it is the men who really need lessons on how to behave," she said.

Find a Hospital A-Z Drug Brands in India Accident and Trauma Care Post-Nasal Drip Find a Doctor Drug - Food Interactions Selfie Addiction Calculator Indian Medical Journals Pregnancy Confirmation Calculator Loram (2 mg) (Lorazepam)
This site uses cookies to deliver our services. By using our site, you acknowledge that you have read and understand our Cookie Policy, Privacy Policy, and our Terms of Use