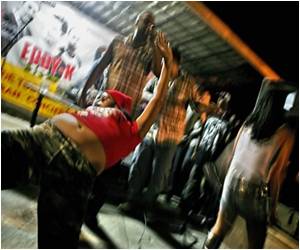 In Goa, Indian tourist officials warned that if there was any evidence of "obscenity, vulgarity or nudity" then they will shut down a Playboy club set to open next month.

Playboy's local franchisee PB Lifestyle has announced plans for more than 100 outlets in India, starting with a beachside club in the holiday state, but their "bunny" waitresses will sport a new look to suit conservative Indian values.

"They may brand the club as Playboy but if they indulge in obscenity, vulgarity or nudity, then we will withdraw their permission immediately," Goa's director of tourism Nikhil Desai, told AFP.


He said he was unaware of any formal application for a licence.

PB Lifestyle, which has the rights to develop Playboy outlets in India, plans to open clubs, hotels, fashion cafes and shops across the country in the next 10 years, investing at least two billion rupees ($37 million).

The firm is planning more modest outfits for the bunnies, famous for their skimpy costumes of corsets with fluffy rabbit tails and ears, PB Lifestyle chief Sanjay Gupta told AFP on Thursday.

He also stressed no nudity would be involved.

Playboy magazine, along with a host of other foreign "adult" magazines, is not permitted in India owing to obscenity laws banning material deemed "lascivious or appealing to prurient interests".

'Vulgarity' in Popular Music Irks Cuba
The "vulgarity" in popular music that is increasingly common in music played by young people on the communist island has irked Cuba.
READ MORE

Italy Bans Sunglasses Advertisement for Being too 'vulgar'
A suggestive sunglasses advert for American designer Tom Ford showing a woman's lips biting a man's finger was banned in Italy Tuesday for being too "vulgar.
READ MORE

People in Bihar Protest Vulgar Films and Shows on TV
People of different age groups including college students here took out a rally to protest vulgarity being depicted in television programmes and movies.
READ MORE