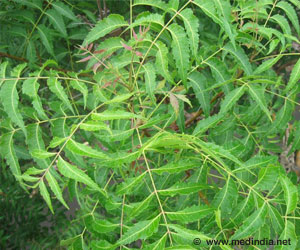 Neem tree, which is widely used in traditional Indian medicine to treat various ailments, could also help kill cancer cells, according to scientists.

Cancer cells typically avoid death by hijacking molecular chaperones that guide and protect the proteins that ensure normal cellular function and then tricking them into helping mutated versions of those proteins stay alive, said Dr. Ahmed Chadli, a researcher in the Molecular Chaperone Program at the GRU Cancer Center and senior author of the study.

Drug development has focused on the chaperone Hsp90 (heat shock protein 90) because it plays a key role in assisting mutated proteins, making it an attractive cancer drug target.


However, the clinical efficacy of Hsp90 inhibitors has been disappointing. Most current small molecules targeting Hsp90 have inadvertently resulted in the expression of proteins that protect cancer cells from programmed cell death and compromise the Hsp90 inhibitors in the clinic.
Advertisement
In this study, however, Chaitanya Patwardhan, a graduate student in Dr. Chadli's lab, found that gedunin, a compound extracted from the Indian neem tree (Azadirachta indica), attacks a co-chaperone, or helper protein, of Hsp90 called p23.

"The idea here is that this will open a door for new ways of targeting Hsp90 by targeting its helper proteins, which may be used in combination with established Hsp90 inhibitors that are ongoing clinical trials. In the future, this research could have applications in drug development for hormone-dependent cancers, including breast, prostate and endometrial cancers," he added.

"This finding is an important piece of the puzzle, bringing us closer to our goal of helping patients with cancer," he added.

The study has been named the Journal of Biological Chemistry's Paper of the Week.

Foods that Fight Cancer
A plateful of fresh fruits and vegetables, whole grains and legumes is the best diet to fight most ....

Soon, Neem Tree to Fight Against HIV Virus
An assistant professor at Kean University is exploring into understanding the medicinal properties ....