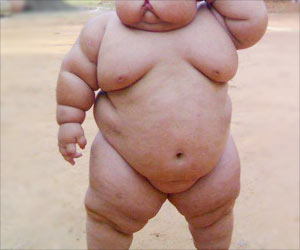 A poverty-stricken father is prepared to sell his kidney to pay for the medical treatment of his three obese children.

Yogita and Anisha eat 18 chapattis, two bowls of soup, 3 lbs of rice, six packets of chips, five packs of biscuits, 12 bananas, and a liter of milk. As they experience frequent hunger, their 30-year-old mother Pragna Ben spends most of her day making their meals.


"My day starts with making 30 chapattis and 1 kg vegetable curry in the morning. After that I am again in the kitchen preparing more food. Their hunger never stops. They demand food all the time and cry and scream if they're not fed. I am always in the kitchen cooking for them," said Pragna Ben.
Advertisement
Nandwana said, "If my kids continue to grow at this rapid rate they will have major health issues. We're terrified they will die."

The family has already spent a lot of money on consulting with doctors and treatment over the last three years. "When Yogita was born she was extremely weak and weighed just 1.5kg (3.3lbs). We were worried for her health. So we fed her a lot during the first year of her life to build her strength but by her first birthday she had bloated to 12kg (1st 12lbs)," said Nandwana.

Their third daughter Anisha also went through the same phases like Yogita. The couple understood their children suffer from some disorder only after their youngest son became obese within a year like his siblings.

When Tackling Childhood Obesity, Parental Sleep as Important as Child's Sleep
Parental sleep is related to child sleep, which is in turn, linked to a decreased risk of childhood ...

Impact on Childhood Obesity can be Positive With Motivational Interviewing
A new study reveals that an obese child's weight is successfully reduced with the usage of ......

Study Finds Early Life Risk Factors And Racial/Ethnic Disparities in Childhood Obesity
According to a study, racial and ethnic disparities in children who are overweight and obese may be ...