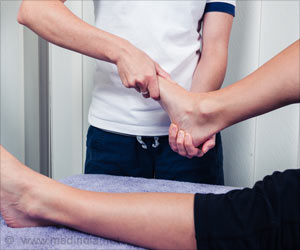 Indian doctors have managed to save the life and limb of a 24-year-old medical student from Uzbekistan who suffered from tumour bone malignancy at multiple points between the knee and hip for four years.

According to sources, three surgeries had failed to check the spread of the tumour and, when amputation was suggested by doctors in his home country, he rushed to India seek medical help.

"This is a rare case of cancer in the right femur. When the patient came to us, we found tumour was present at three points on the right femur bone between the hip and knee," said Dr Rajeev K Sharma, senior consultant, orthopaedics and joint replacement surgeon at Indraprastha Apollo Hospital.


The doctor added that a rare bone replacement surgery, from hip to the knee, was conducted to save his limb. " To be able to get rid of the cancer completely, we had removed the entire thigh bone from the right hip to the right knee and reconstructed the same artificially," said Dr Sharma. The surgery was done about two weeks ago.

Son of a physiotherapist in Qarshi, a city in southern Uzbekistan, Sobidjan Juraev was diagnosed with tumour bone malignancy in the femur in March 2011. "The pain has lessened now and I am more than glad to be returning home," Juraev said.