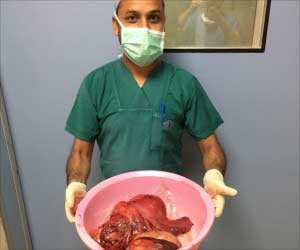 Two tumors, each weighing over 1 kg were removed from a patient from Tanzania by doctors at the Sir Ganga Ram Hospital (SRGH),in New Delhi, India.

Omar Salim, 32, was admitted to the SRGH in October 2017 with complaints of a large mass in his abdomen and consequent abdominal pain for the past one year. Doctors in his native country had earlier failed to understand the gravity of the problem.

Advertisement
‘Usually, rectal Gastrointestinal Stromal Tumor (GIST) are smaller than 5 cm. However, the size of the tumor in Omar was five times bigger.’

A previous attempt at surgery in a Tanzania hospital on the patient had failed in view of the extent of the disease, doctors said.


Omar was initially evaluated on the basis of a CT scan that revealed a large mass in his abdomen along with compression of urinary bladder and extending to the anterior abdominal wall up to the umbilicus level.
Advertisement
He had another large mass in the left lobe of his liver, occupying nearly the whole of the left upper abdominal area. Biopsy revealed a rectal tumour.

The surgery was planned after targeted therapy for three months failed to achieve the desired results.

The patient underwent resection of both lesions successfully on January 31, which lasted for seven hours without any blood transfusion.

Emphasising that tumours in rectal GIST usually are smaller than five cm in size, Mangla said in case of Omar, the size of the tumour was nearly five times bigger.

"The management of large tumours of the rectum is particularly challenging. These tumours tend to be very vascular and surgery entails risk of major blood loss. There was very limited working space as most was occupied by the tumour," he added.

Source: IANS
Advertisement
<< Variations in Lung Branches may Increase the Risk of COPD
Zika Virus Infection in Mother can Cause Brain Damage in Fet... >>

Colorectal Cancer Patients To Overcome Drug Resistance, Feasibility Found by Researchers
The drug cetuximab when combined with other treatments has been shown to prolong survival in ......