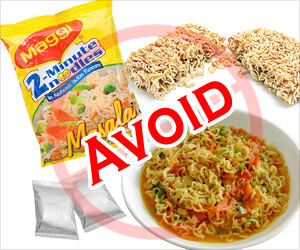 India's government is preparing to seek damages from Nestle after a food scare involving excessive lead in its hugely popular Maggi noodles sparked a nationwide recall, an official said Monday.

The consumer affairs ministry is to seek an undisclosed amount of compensation from the Swiss giant for false advertising after the food safety regulator branded the noodles "unsafe" and "hazardous".

Ministry deputy secretary G.C Rout said the case would be filed in the National Consumer Disputes Redressal Commission, a semi-judicial body that can levy fines against companies. "We are going to file a case against Nestle and are presently collecting the material for the case," Rout said, saying the minimum amount that could be sought was 10 million rupees ($156,000). "There are sections of the consumer protection act that empower state and central governments to file a case in the larger interest of the consumers."


A Nestle spokesman said the company was not willing to comment as it had not yet seen the case.

The Food Safety and Standards Authority of India (FSSAI) banned Nestle on Friday from making and selling the noodles after tests by some states found lead levels above statutory limits.
Advertisement
Nestle, which denies the charges and says the noodles are safe to eat, had already announced it was pulling the product from sale as it seeks to contain growing safety concerns.

At least six states including India's capital have announced temporary bans on the sale of the instant noodles in the past few days, after officials said test results showed high lead levels.

The case came as the FSSAI announced Monday it was ordering testing of other brands of noodles as well as packet pasta amid growing concerns over the food safety scare.

FSSAI said the 33 products made by nine companies including Nestle India and ITC (Indian Tobacco Company) will be tested for lead, arsenic and 19 other substances.

Nestle global chief executive Paul Bulcke said on Friday its noodles were "safe for consumption" after flying into India to try to reassure consumers over the safety scare.

Nestle has been selling its Maggi brand for over three decades in India, and has 80 percent of the country's instant noodle market.

Several celebrities have endorsed Maggi over the years, including Bollywood superstar Amitabh Bachchan.

Source: AFP
Advertisement
<< Indian Women Have Accepted Grooming While Men are Opening Up...
After Maggi Other Noodle Brands and Pasta Will also be Teste... >>

Bahrain Bans Import and Sale of Nestles Maggi Noodles Manufactured In India
The ministry has ordered vigilance at the country's ports to ensure that no more of the ......

The Maggi Way of Life: The Story of India's Favorite Two Minute Noodles
Recently Maggi grabbed headlines after it courted controversy over charges of excessive lead in its ...