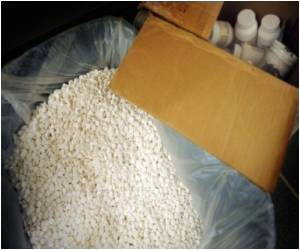 About 3.1 million Indians unlawfully use opiate, an opium derivative, out of which half use synthetic opiate, an international report released said on Tuesday.

The International Narcotics Control Board (INCB) annual report says that at $1.4 billion, India is also the biggest consumer market for opiate in South Asia.

Nearly one in five Americans reportedly use prescription painkillers to experience an instant high. This could lead to the drug abuser turning entirely dependent on the contents of the drug.
Advertisement

Opiates are drugs containing opium or a derivative of opium, either natural or synthetic, and have a sedative effect. Opiates are also called opioids.


INCB is an independent and quasi-judicial organisation which monitors the implementation of the United Nations drug control conventions.

Dominant Discoveries and The Darker Side Of Methamphetamine Drug Addiction

Antidepressant therapy with bupropion may hold the key towards methamphetamine addiction

The female sex may be more vulnerable to cocaine addiction.
Advertisement