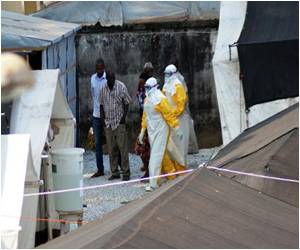 The Indian government opened an emergency helpline on Saturday and put the country's airports on alert as part of measures to tackle any outbreak of the deadly Ebola epidemic.

India has nearly 45,000 nationals living in the four Ebola-affected West African nations and health officials said there was a possibility of some of them returning to their home country if the outbreak worsens.

The illness was declared an international health emergency by the World Health Organization Friday and authorities voiced fears the virus could spread worldwide.


India's Health Minister Harsh Vardhan said in a statement the country has "put in operation the most advanced surveillance and tracking systems" for the hemorrhagic virus.

Spanish Nun Does Not Have Ebola

Blood tests showed no sign of Ebola in a nun who was evacuated from Liberia, Spanish doctors have confirmed.
Advertisement
"There is no need to panic," Vardhan said, calling risk of Ebola cases in India "low".

But the New Indian Express newspaper voiced concern in an editorial that India's already overburdened health services could not cope with any Ebola outbreak.

A country as "populous as India cannot afford to set up adequate isolation, containment facilities and equip medical personnel with protective gear", the newspaper said.

There are some 4,700 Indians in Guinea, Liberia and Sierra Leone, the three countries worst hit by the disease, while another 40,000 live in Nigeria, which has also reported Ebola.

"If the situation worsens, there could be a possibility of these Indians travelling back," the health minister said.

"Preparedness measures are in place to deal with any case of the virus," he said.

The WHO had informed India about a traveller who was possibly exposed to Ebola. He tested negative but has been told to report to authorities if he develops any symptoms, the ministry said.

The ministry said an "emergency operation centre" helpline for reporting any cases started operations Saturday and "surveillance is being strengthened at airports and ports".

The government is setting up centres at airports and ports to deal with travellers showing any potential symptoms of Ebola, spread through close contact with bodily fluids of people who who are sick.

All air passengers arriving in India from Ebola-affected countries must now fill in a symptom-checklist form and provide addresses as the government builds a database to track people who might develop symptoms.

A US doctor who contracted the Ebola virus while working in Liberia revealed that he is growing stronger two weeks after being diagnosed with the infection.
Advertisement
<< Survey Finds 80 % of Saudis Blame 'Flirtatious Behavior' by...
Technology Boost: Mobile Apps Help Doctors Treat Patients U... >>

Ebola Survivors in Guinea Afraid of Being Labeled as Freaks

Blood Pressure Calculator A-Z Drug Brands in India Iron Intake Calculator Find a Hospital Turmeric Powder - Health Benefits, Uses & Side Effects Nutam (400mg) (Piracetam) Find a Doctor Accident and Trauma Care Sanatogen Noscaphene (Noscapine)
This site uses cookies to deliver our services. By using our site, you acknowledge that you have read and understand our Cookie Policy, Privacy Policy, and our Terms of Use