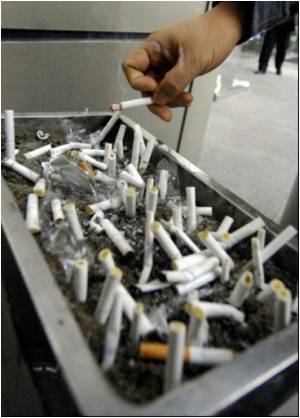 In India, plain packaging for cigarettes as adopted by Australia could be taken up, says a top health official.

Tobacco products in Australia will be sold in drab, uniform packaging with graphic health warnings from December in a ground-breaking move that has attracted worldwide interest.

"It is a good idea and can be pursued," Amal Pushp, director of tobacco control at the health ministry, told AFP. "We are watching the developments in Australia with interest."


His comments came after Australian and Indian health experts presented a report by the University of Melbourne that found 275 million Indians use tobacco, leading to nearly one million deaths a year.

Approximately half the smokers die due to smoking -related diseases. But it is not just the smokers who are at the receiving end. The passive smokers too, often pay a heavy price. If you still have not 'kicked the butt', learn more horrifying facts about smoking by participating in the following quiz.
Advertisement
India's health ministry welcomed the report and said that plain packaging as adopted by Australia could be taken up.

The World Health Organization has called on other countries to pass similar laws.

In plain packaging, graphic warnings are retained but all colour, imagery and corporate logos are taken off to reduce the appeal of smoking, especially among youngsters.

Manufacturers are allowed to print only the brand name on the pack in a limited font size.

"India must initiate legislation on plain packaging, which would have tremendous public health impact."

One image attracted widespread publicity as it used an apparent picture of England footballer John Terry with a superimposed set of blackened lungs.

Tired of people asking you to stop smoking around them? Don't want to be ordered around by public smoking bans? Simple steps that help you to quit smoking.
Advertisement
<< Chemical-Castration Drug Prescribed To Gay Teenager
Kochi to Host Global Healthcare Summit >>