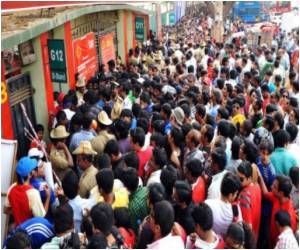 A report by the 'Janasankhya Sthirta Kosh' (National Population Stabilization Fund) under the Ministry of Health and Family Welfare has said that the rapidly increasing population in India has witnessed a five-fold increase over the last 100 years and is expected to surpass China's population by 2050.

The Government projections showed that while India's population grew by 1.4 percent over the last five years, China witnessed only a 0.6 percent population growth for the same period.

Medindia's Population clock gives you an approximate population of India. It is dynamically updated based on birth and death rate.
Advertisement


It has been reported that India will have to share an additional burden of 371 million by 2026.

Out of this, Uttar Pradesh will have a share of 22 percent, Bihar eight percent, Uttarakhand one percent, the four southern states 13 percent and Madhya Pradesh and Rajasthan 7 percent each.

World Population Day which falls on July 11, 2010 was instituted by the United Nations Population Fund (UNFPA) in 1989 as a conduit to create awareness on the issues concerning population.
Advertisement
Talking about aspects of family planning, which have been initiated over the years, the report says the rate of sterilisation was the highest in Chhattisgarh at 74 percent, while in Jharkhand 68 percent had been achieved.

The high infant mortality rate, which leads to demand for more children, has been held responsible for population growth as per the report.

Interesting information about the use of birth control pills, a debate about the birth control responsibility of men and women and development of hypothetical male contraceptive pill.
Advertisement
Advertisement
This site uses cookies to deliver our services.By using our site, you acknowledge that you have read and understand our Cookie Policy, Privacy Policy, and our Terms of Use  Ok, Got it. Close
×