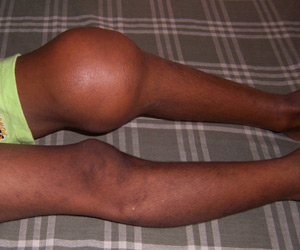 'Vigorous physical activity is thought to increase risk of bleeds in children with hemophilia, but the magnitude of the risk is unknown,' says background information in an article. Hemophilia is a bleeding disorder that, if untreated, causes recurrent bleeding into joints. Information about risks associated with physical activity is necessary to help inform decisions regarding participation in physical activity, the authors write.

Hemophilia is a rare single gene, X- linked disorder, which tends to run in families.
Advertisement

Carolyn R. Broderick, M.B.B.S., of the University of Sydney, Australia and colleagues conducted a study to quantify the transient (short duration) increase in risk of bleeding associated with vigorous physical activity in children with hemophilia. The study was conducted at three pediatric hemophilia centers in Australia between July 2008 and October 2010 and included 104 children and adolescent boys ages 4 through 18 years with moderate or severe hemophilia A or B who were monitored for bleeds for up to 1 year. Following each bleed, the child or parent was interviewed to determine exposures to physical activity preceding the bleed. Physical activity was categorized according to expected frequency and severity of collisions. The risk of bleeds associated with physical activity was estimated by contrasting exposure to physical activity in the 8 hours before the bleed with exposures in two 8-hour control (non-bleed) windows, controlling for levels of clotting factor in the blood. The median (midpoint) duration of follow-up was 52 weeks.


There were 436 bleeds, of which 336 were study bleeds (i.e., bleeding episodes without another bleeding episode in the preceding 2 weeks). Eighty-eight participants (84 percent) reported at least 1 bleed. The most frequent sites of bleeding were the knee (15 percent), ankle (14 percent), and elbow (10 percent). Compared with inactivity and category 1 activities (e.g., swimming), category 2 activities (e.g., basketball) were associated with a transient increase in the risk of bleeding (30.6 percent of bleed windows vs. 24.8 percent of first control windows; odds ratio, 2.7). Category 3 activities (e.g., wrestling) were associated with a greater transient increase in risk (7.0 percent of bleed windows vs. 3.4 percent of first control windows; odds ratio, 3.7). These odds of bleeding suggest that for most children, the absolute increase in risk associated with physical activity is low. "To illustrate absolute risk increase, for a child who bleeds 5 times annually and is exposed on average to category 2 activities twice weekly and to category 3 activities once weekly, exposure to these activities was associated with only 1 of the 5 annual bleeds," the authors write. Most bleeds associated with physical activity were present within an hour of activity.

World Hemophilia Day 2009: Together, We Care

"Together, We Care" - the slogan for World Hemophilia Day 2009 celebrated on 17th April embodies a spirit of collaborated and comprehensive global care for hemophilia patients.
Advertisement
"This study confirms that physical activity is associated with an increased risk of bleeds in children and adolescents with moderate or severe hemophilia A or B. It demonstrates that the relative increase in risk is moderate. However, for most children, the absolute increase in risk is likely to be low," the researchers conclude.