In Odisha Dengue Kills One

This year's first dengue death in Odisha was confirmed by authorities.

The woman, who belonged to Talcher area of state's Angul district, about 170 km from here, died at a private hospital in Bhubaneswar Sunday, an official at the state health control room told IANS.

At least 123 new cases of mosquito-borne dengue have been reported, taking the total infected by the disease in the state this year to 972, he said.


Of the latest cases, the highest of 27 have been reported from the Cuttack district followed by 24 in Angul and 18 in Khordha district, he said.

Dengue cases have been reported so far from 24 of state's 30 districts. 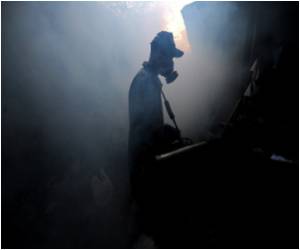 New Research may Influence the Development of Therapies to Treat Dengue
Dengue is an insect-borne tropical disease that infects up to 390 million people worldwide annually.
READ MORE

38 Fresh Cases of Dengue in Odisha
Taking the figure for the year so far to 268, Odisha authorities confirmed 38 fresh cases of dengue fever. Cuttack has been the worst-hit with 187 cases.
READ MORE