In Love With the Game, Not With the Brazil World Cup 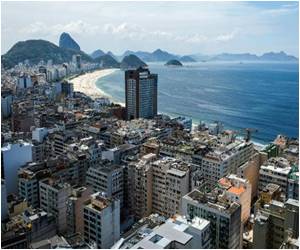 Football is loved by all Brazilians, but not all of them like the World Cup.

The cost of the event -- estimated to be above $11 billion -- has infuriated a large segment of the population and brought protesters out onto the streets.

A pavilion designed by a prize-winning architect, to celebrate the World Cup is still not ready, just days before the first ball is kicked.
Advertisement

Some are unhappy enough at the prospect of the month-long tournament landing on their doorstep from Thursday to head for foreign climes. Others privately hope the event will prove a failure.


One who is in the anti-camp, as Brazil skipper Thiago Silva and company chase a sixth title for the hosts, is accountant Marcus Toledo, 42.

Toledo and a group of like-minded friends have even gone as far as getting together on Brazil match days to support the team's opponents.

A paraplegic wearing an Iron Man-like robotic bodysuit will make the first kick at the World Cup opening ceremony.
Advertisement
"As I am crazy about football I feel betrayed by this Cup, which only rich people and the privileged will be able to attend," says Toledo, from Rio.

"I absolutely hope World Cup defeat and the failure of the organization of the event will serve as a lesson regarding what are our priorities today," namely public services such as health and education, he explains.

The fruits of the Cup are a populace unsatisfied with the government -- and "tons of money in the pockets of those involved with the construction work" for the event, sighs pensioner Joao Carlos de Lima, 64.

"I even hope Brazil don't make it to the quarter-finals so there's no party at all," he goes as far as saying.

The Flamengo supporter says not supporting the Selecao is his way of showing his discontent with the government of President Dilma Rousseff.

He urges people to "realize a victory for Brazil in an electoral year would give a major fillip to those who are in power."

Rousseff for her part rejects any link between the outcome of the Cup and the October 5 vote which she hopes will see her win re-election.

"I do not think the Cup will decide my election. It will neither help nor prejudice me.

"Brazil can be champions and I can lose the election -- or Brazil lose the Cup and I can be re-elected," she said in April.

Rousseff remains favorite to win the election with an Ibope poll last week giving her a 34 percent vote share, though that was down from 37 percent in May.

Having had no choice other than stay put in the office owing to a major demonstration this time last year, Cecilia Menezes Castro, a lawyer in the city, made a decision with her husband.

She would take this year's holidays between June 12 and July 13 -- coinciding with the Cup -- in the United States, well away from the event.

As tourists pile into the host cities -- not least Rio, which will host seven games -- there are those, like Cecilia, who want nothing more than to get away from the "Marvelous City."

She told AFP: "I knew I couldn't face being here during the Cup," given the hullabaloo and the traffic.

Some travel agencies have seen a chance to offer tailored package deals to those looking for a swift Cup getaway and Castro has snapped one up.

Another fleeing the country to escape the Cup is psychoanalyst Anna Beatriz Medici, 37, who is heading off for a three-week break in Italy with her mother.

"I planned it for two days before the start of the event to avoid chaos at the airport," she told AFP.

Anna says she's a huge football fan -- she is a supporter of Rio side Fluminense and regularly watches action at the Maracana.

She says she does plan to follow World Cup news from Italy.

"Of course I am going to support Brazil. But I think it will be an interesting experience to do that far from home," she muses.

An Ibope poll from earlier this month showed only 51 percent of Brazilians now back the Cup, with 42 opposed.

Haiti has already caught a serious case of football fever with just days to go before the World Cup kicks off in Brazil.
Advertisement
<< Protein Blocks HIV Life Cycle in Elite Controllers: Study
Designer's Use of Symbol Angers Sufi Students >>

Sanatogen Vent Forte (Theophylline) Loram (2 mg) (Lorazepam) The Essence of Yoga Iron Intake Calculator Noscaphene (Noscapine) Indian Medical Journals Blood Donation - Recipients Find a Hospital Drug Side Effects Calculator
This site uses cookies to deliver our services. By using our site, you acknowledge that you have read and understand our Cookie Policy, Privacy Policy, and our Terms of Use

In Love With the Game, Not With the Brazil World Cup Personalised Printable Document (PDF)