In India, Politics is Still a Man's Game 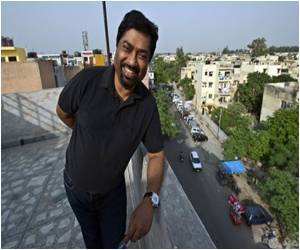 For political parties vying for votes in India's mammoth general election, women's issues may be high on the agenda, but few female lawmakers will get an opportunity to implement the policies being proposed.

Less than a fifth of the candidates standing for the front-running main opposition group, the Bharatiya Janata Party (BJP), or the ruling Congress, are women, according to an analysis by AFP.

Billboards Creating Politics Among the State and Federal Exchanges

The issue continues with whether Obamacare is an advantage or that the state could function better without federal interference.
Advertisement

In the current parliament, women hold only 11 percent of seats in both houses, less than Pakistan at 21 percent and Afghanistan at 28 percent, research by the Inter-Parliamentary Union group shows.


"Suddenly it's women this and women that... but it all fades after elections," said Rachita Shah, a 28-year-old graphic web designer.

"It's nice to hear, but it would be better if we could actually see these 'measures for women's empowerment'," she said, mockingly using air quotes while shopping at a busy Delhi flea market.

Greg Dube, a recent Northeastern University graduate hopes to launch a bright engineering career soon, but like many young Americans, he is haunted by a looming financial burden: some $150,000 in
Advertisement
Politicians are going all out to win over women -- earlier seen as wallflowers -- with "empowerment", a recurrent theme 16 months after the fatal gang rape of a student on a bus in New Delhi rocked the nation.

That case, which led to protests in the capital, sparked intense media scrutiny of the widespread abuse of women, forcing efforts to sensitise men and counter discrimination.

Many women voters, who form 49 percent of the 814 million electorate, say they are pleased to see the BJP splashing billboards, newspapers, radio and TV slots with vows for women's safety.

Nine in ten Indians see rape as a "very big problem", while eight in ten believe the problem is growing, a study published last week by the US-based Pew Research Center said.

"It feels good that the focus is on us, finally," said shopkeeper Gauri Joshi, 35, in suburban Delhi.

But others are unconvinced by the attention, accusing parties of cynically tapping into the national anger over the Delhi rape case and others which have reversed years of complacency about growing sexual violence.

"How can we expect change when a lot of these politicians hate women and think rape is normal?" said Shagun Behl, a 26-year-old dance teacher.

Shagun was referring to Mulayam Singh Yadav, leader of the regional Samajwadi Party, who triggered outrage on April 11 when he described a group of convicted rapists as "boys" who had made "mistakes".

But the 63-year-old also spurred controversy a few days before Yadav's comments when he belatedly declared that he was married to a woman he had never previously acknowledged or divorced.

His rival Rahul Gandhi, leading campaigning for the Congress party, accused him of hypocrisy, saying Modi promised respect for women but neglected his own wife.

While the Congress party says it will provide free sanitary napkins and set up crisis centres for women, the BJP vows to introduce self-defence classes in school and to earmark extra spending on women.

They have both pledged to pass the pending Women's Reservation Bill that would reserve a third of seats in national and state assemblies for women among other measures.

"The women's bill is being blocked out of pure misogyny ... Even the manifestos have a long way to go. Most of the promises are appallingly vague," said Kavita Krishnan, secretary of the All India Progressive Women's Association.

Politician Meenakshi Lekhi, who is standing for the BJP in New Delhi, acknowledged the general lack of women in politics.

Until recently the president was a woman and the most powerful politician of the last 10 years has been Sonia Gandhi, head of the Congress party. Three regional party chiefs are also female.

But below these public figureheads, men predominate.

"You can't change 65 years of Indian history overnight where women have more or less stayed out of politics. But the paradigm is changing now," Lekhi told AFP, adding that political parties would field more women had they been "available".

The BJP is tipped to oust the ruling Congress after its two terms in power in the staggered five-week election that ends with results on May 16.

The father of the New Delhi gang rape victim, who died of her injuries two weeks after the assault, said only then would the real test on women's rights begin.

"All these promises are just words to win votes. Let's see if they ever see the light of day," he told AFP.

A new videogame called Demokratia provides a merciless take on Russian politics that has made it a runaway success in the land of Vladimir Putin.
Advertisement
Advertisement
This site uses cookies to deliver our services.By using our site, you acknowledge that you have read and understand our Cookie Policy, Privacy Policy, and our Terms of Use  Ok, Got it. Close
×