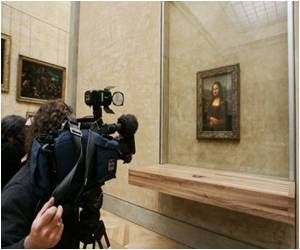 Before carefully pulling back long velvet white drapes to reveal a radiant painting of what looks like a younger version of the Mona Lisa displayed in the Louvre, the Zurich-based Mona Lisa Foundation said it had evidence the work had indeed been executed by the Italian master.

On the verge of unearthing the remains of the woman who is believed to have inspired Leonardo da Vinci's Mona Lisa - Lisa Gherardini are researchers.
Advertisement

"Historical evidence suggests that Leonardo da Vinci left unfinished an earlier portrait of Mona Lisa in which she is flanked by side columns," the foundation said in a statement.


The foundation had gathered a number of experts in Geneva to testify to the probability that the portrait, known as the "Isleworth Mona Lisa", had been painted but left unfinished by da Vinci about a decade before he completed its famous sister.

Leonardo Da Vinci's 'Mona Lisa' to be Shown in Geneva

According to the Mona Lisa Foundation, an earlier version of Leonardo da Vinci's Mona Lisa will be shown to journalists in Geneva on Thursday.
Advertisement
Alessandro Vezzosi, director of the Leonardo da Vinci Museum in Vinci, Italy, and a world-renowned expert on the artist and the Mona Lisa, whetted the appetites of the 100 journalists present for the occasion, describing the painting as "an important work of art".

He said the foundation's claim that the two paintings portray Lisa del Giocondo at two different moments of her life was "a fascinating possibility".

Joe Mullins, a forensic specialist trained at the FBI, described how he had "age regressed" the original "Mona Lisa" to determine what she would have looked like 11 to 12 years earlier.

He described himself as a "digital plastic surgeon", giving the painting "a digital facelift and Botox".

Showing pictures to reporters, he pointed out: "Everything lined up perfectly. Based on my experience... the facts and the images speak for themselves.... This is 'Mona Lisa', two different images at two different times in her life."

The "Isleworth Mona Lisa" was bought in 2003 by a private consortium that remains anonymous, so it is unclear who would benefit from its unveiling after 40 years in a Swiss vault.

However, several experts said they suspected the Italian master had not painted an earlier version.

"The 'Isleworth Mona Lisa' mistranslates subtle details of the original, including the sitter's veil, her hair, the translucent layer of her dress, the structure of the hands. The landscape is devoid of atmospheric subtlety," Oxford University art historian Martin Kemp said in a statement.

"The head, like all other copies, does not capture the profound elusiveness of the original," he added.

Several other experts also voiced scepticism to AFP about the "earlier version" claim, but they refused to be cited.

Paris's famed Louvre museum also refused to comment on whether it believed the painting displayed Thursday was in fact an earlier version of the world-famous "Mona Lisa" it houses.

New light has been shed on the painting technique that allowed Renaissance master Leonardo da Vinci to give the Mona Lisa such an extraordinary delicate charm by French scientists.
Advertisement
<< 'Pink Dollar' to Break Cultural Barriers
For Melanoma Drug Combinations Effective: Study >>

Neuroscientists at the Institute of Neuroscience in Alicante, Spain claim to have solved the mystery as to why some people see Mona Lisa's smile and some don't.
Advertisement
News A-Z
A B C D E F G H I J K L M N O P Q R S T U V W X Y Z
What's New on Medindia