In Eye of the Storm is Brazil Implant Maker 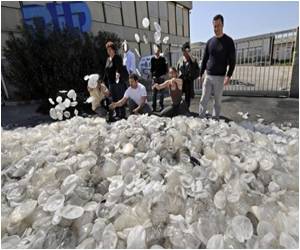 'Silimed' of Brazil, the third most popular producer of silicone breast implants in the world, has suddenly landed itself in the eye of a global firestorm.

In this body-obsessed nation, where more than 1.5 million women have silicone breast implants, the once reclusive company now plays host to national and international journalists.

The Brazilian health ministry is courting senior company executives to help reassure a public perturbed by horror stories from the other side of the world and to restore faith in a product that is very much in demand.


Founded 33 years ago, Silimed was the "first in 1995 to put a serial number on its implants," Claudio Carvalho, Silimed's production chief, explained to AFP, conscious of the need to vouch for the safety of the company's products.

Want firm and shapely breasts? Consider the option of traveling abroad to have it done at affordable prices.
Advertisement
The health scare erupted in France in December, when a French company was accused of using an illegal industrial-grade gel that investigators say has led to abnormally high rupture rates.

Some 300,000 women in 65 countries are estimated to have had implants made by the now-defunct French firm, PIP, and more than a dozen countries in Europe and Latin America have urged women to have checkups.

Brazil banned PIP (Poly Implant Prothese) products last month but some 35,000 had already been imported and some 25,000 sold.

Behind glass windows at a plant in a northern Rio suburb, dozens of men and women wearing masks and thin rubber gloves meticulously feel, flip and pull on transparent silicone gel balls.

Located near the Vigario Geral slum, which provides half of its 450 employees, there is no sign on the outer walls of a plant that used to keep a low profile despite exporting to more than 60 countries around the world.

"Here we conduct more than 15 quality control tests before packing, from the membrane which gives the shape to the silicone gel content," Carvalho said.

The gel used for the implant is made in California and "it does not leak in the body even in case of an accident," he insisted.

That said, the industry is now under the microscope.

An estimated 19,500 Brazilian women are thought to carry PIP implants. The National Agency for Sanitary Surveillance (ANVISA) has pledged to pay for surgery to remove any found to be defective.

"In Brazil, women pay to be beautiful and men increasingly resort to bum or chest implants," said Silimed owner Margaret Figueiredo, who anticipated the silicone boom of the 1990's but now wonders if scandal will ensnare her dreams.

"It is difficult to supervise everybody. This gentleman (PIP founder Jean-Claude Mas) cheated and I am shocked by it. Initially people will be worried, but later I expect things will return to normal," she told AFP.

So far the furor has shown little sign of denting demand, at least in Brazil, and with credit payments plastic surgery is becoming accessible to more and more women in this booming Latin American powerhouse.

The most popular operations are liposuction, followed by breast implants, bum lifts and tummy tucks.

Carolina and Aline, two Silimed employees both aged 27, speak with pride of their implants.

"I have 300 milliliters (of silicone) in each bum cheek. Since then, men look at me differently. I am very happy with the result and I am thinking of increasing the dose," Aline told AFP.

"Brazil is a tropical country where the body is exposed. You have to show off your best part," said Carolina, who had filled each of her breasts with 250 milliliters of silicone.

Worldwide in 2010, plastic surgeons carried out an estimated 18.5 million operations, according to the International Society of Aesthetic Plastic Surgery (ISAPS), a non-profit group representing surgeons in 93 countries.

The United States topped the list last year, with 3.3 million operations, followed by Brazil with 700,000.

Brazil's SBCP says that "nine out 10 surgeons" in the country used Silimed implants rather than imported products.

Losing sleep over the size of your breasts? Then wake up to breast enlargement! Consult us our specialists to realize your dream at affordable prices.
Advertisement
Advertisement