In China, NGO Give Prisoners' Children Hope and a Fresh Start 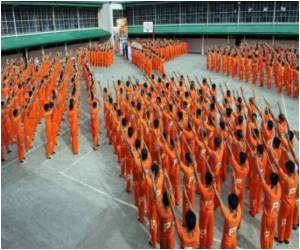 Tu Ling likes to draw pictures for his father and dreams of being reunited with his mother. The 10-year-old is completely unaware that he will never live with either of them again.

Tu's father has been jailed for life for murdering his mother.

Prisons are excellent breeding grounds for HIV, enabling the AIDS virus to propagate swiftly and stealthily, yet many options exist for tackling the problem, the world AIDS conference heard.
Advertisement

The boy is one of dozens of Chinese children living at Sun Village, an institution in the suburbs of Beijing set up by a former prison officer who says she wanted to give the offspring of inmates a chance for a fresh start.


"I realised what the prisoners were concerned about the most was not themselves but their children and families," Zhang Shuqin, the founder of Sun Village, told AFP in an interview at the facility.

Bulgarian Prisoners Get to Use Real Toilets Instead of Chamber Pots

Prisoners in Vratsa have begun to use real toilets instead of the usual chamber pots as part of the campaign to improve conditions in Bulgaria's jails.
Advertisement
Zhang, 62, was inspired to start Sun Village after interviewing dozens of inmates for the prison administration bureau's internal newspaper in northern Shaanxi province.

Moved by their heartbreaking stories about being separated from their children and their distress at not knowing where they were, Zhang opened the first village in 1996 in Shaanxi.

Since then -- and with no government funding -- she has built another five villages, including the one in the Beijing area.

"Some kids were missing, some had been sold and others had been taken away by relatives. Some had no one to protect them when they were very young," Zhang said.

Children as young as four months old are sent to Sun Village centres after their parents have been sentenced to serve time. Many have been abandoned by their relatives who are too old or poor to care for them.

Before arriving at the village, some children have been living on the streets for months, or even years, scavenging for food and resorting to crime to survive.

Ma Yufei, 12, told AFP he has spent half his life at the village.

Police brought him here from the northern province of Hebei, after his father was sent to prison. He says he doesn't know where his mother is and is too traumatised to discuss his father's crime.

"The children have various problems when they arrive -- some hate the police for taking away their parents and others have a strong wish for revenge," Zhang said.

"Some have bad habits like stealing, telling lies or being violent because they have been living on the streets. We try to rectify these behaviours and give them counselling."

The children live in brightly painted dormitories surrounded by vegetable gardens, orchards and playgrounds. Each dormitory has a live-in "mother" who cares for the children.

Zhang said the children attend local schools and then, if they pass the entrance exams, are sent to university or attend technical colleges to prepare them for adult life.

"It's not enough to just feed and house the children. They must acquire skills so they can find a job in the future," said Zhang.

With no help from the government, Zhang relies on donations from generous individuals and businesses to feed, clothe and educate the children.

When AFP visited the village, several black Audi sedans -- typically a car used by government officials or well-off businessmen -- pulled up to deliver sacks of rice and flour as well as clothes and shoes for the children.

Zhang supplements these donations by selling chickens and geese raised at the village or selling dates and peaches picked by the children at the village-owned orchards.

"I like living here because there are lots of children, older brothers and sisters, aunts and uncles," Cao Xiangqian, 12, told AFP.

Cao and his five-year-old brother were brought to the village a year ago by their grandfather after their father was taken into custody. He also doesn't know where his mother is.

"I play table tennis and watch television. I like kung fu movies," Cao said, as he sat with a group of boys in front of a TV set in their dormitory.

Zhang said she has helped more than 2,000 children since starting Sun Village 14 years ago, but she knows it is only a drop in the ocean.

As China's prison population grows, the situation is getting worse, so more Sun Villages are in the works, Zhang says.

Sitting in his dormitory, Tu said he will continue drawing pictures for his father until he gets out of jail.

Zhang says they have not told him of his mother's murder, preferring to wait until he is older and can process the news. The child's name has been changed to protect his privacy.

"I'm waiting for my father to be released and then go back to Sichuan to find my mother," said Tu.

"I miss him. I also miss my mother very much."

Prisoners involved in minor crimes will be allowed conjugal visits within jail premises once after every three months, the Sindh government in Pakistan has notified.
Advertisement
<< Relationships Important in Spiritual Care for Patients
Getting on a Flight With Your Pet A Lot Easier Now >>

California has begun to release hundreds of convicts all over the state in an attempt to bring down the population of the prisons.
Advertisement
News A-Z
A B C D E F G H I J K L M N O P Q R S T U V W X Y Z
What's New on Medindia