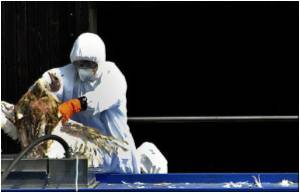 A four-year-old boy has fully recovered and was discharged from a Shanghai hospital on Wednesday. He was one of China's 33 patients hospitalized with the H7N9 bird flu infection.

The boy is the first H7N9 patient to be cured and discharged from hospital. The new strain of bird flu has claimed nine lives after the first human infection was discovered on March 1 in Shanghai.

Lu Hongzhou, a professor with the Shanghai Public Health Clinic Center, said clinical observations have found that if a H7N9 patient can be given treatment no later than five days after he or she shows flu symptoms, China's current therapeutic methods can be effective in treating the disease.


"Over five days, the patient's visceral organs can be damaged, and the medicines like oseltamivir will have little effect on the patient," Lu said.
Advertisement
Doctors with the Pediatric Hospital affiliated to Fudan University, one of Shanghai's designated hospitals for taking H7N9 patients, said they did not use a large dose of antiviral drugs on the boy in order to minimize the side effects.

The boy was diagnosed as infected with the bird flu virus on April 4, three days after he started suffering from a fever and was admitted into a small hospital. The Pediatric Hospital certified the boy's discharge.

Latest tests on the 51-year-old female patient surnamed Jia, who was diagnosed with H7N9 avian influenza on Tuesday, came back H7N9 viral nucleic acid negative, indicating she had recovered from the disease, said Fang Qiang, director with the intensive care unit at the No.1 Affiliated Hospital of the Medical College of Zhejiang University.

"She has now met the standard to be transferred out of the isolation ward," said Fang.

Another patient surnamed Yang, a 67-year-old man who was diagnosed with H7N9 on April 3, has also been recovering after falling into a critical condition for days. He regained consciousness and followed doctors' words on Wednesday.

"Comparatively speaking, his lung functions have improved a lot," according to Li Lanjuan, an academic with the National Key Laboratory for Epidemic Diagnosis and Treatment.

However, Li added that Yang's condition was still serious as he still needs a respirator to breathe.

Doctors said the hospital would give H7N9 virus tests to all patients with a fever higher than 38.5 degrees Celsius free of charge.

The World Health Organization has said there is no evidence H7N9 is passing from person to person.

So far, all cases of the new strain of avian influenza have been detected in Shanghai and the east China provinces of Zhejiang, Jiangsu and Anhui.