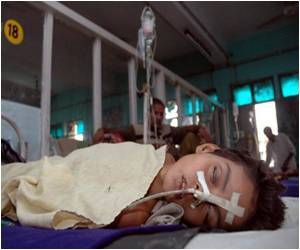 An official said that four more children died of encephalitis in Bihar in the last 48 hours, taking the total number of deaths caused by the deadly disease to 12 in the last one month.

"Two children died Thursday night, while one each on Friday and Saturday at different hospitals in Muzaffarpur district," a district health official said.

At least four more children are undergoing treatment in Muzaffarpur town, about 70 km from here.


This year, so far more than 50 encephalitis cases have been reported across the state. The symptoms of the disease include high fever, irritation and swelling of the brain.

The first encephalitis-related death in the state this year was reported in the last week of April in Muzaffarpur.

Last year, the disease had killed nearly 240 children in Muzaffarpur and Gaya districts.