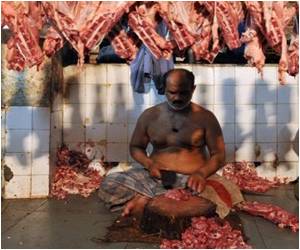 Researchers say that a fragment of a child's skull discovered in Tanzania shows the oldest known evidence of anaemia caused by a nutritional deficiency.

The discovery at Olduvai Gorge, made by a global team of researchers led by Manuel Dominguez-Rodrigo from Complutense University, Madrid, suggests that early human ancestors began eating meat much earlier in history than previously believed.

Thalassemia is an inherited blood disorder passed on through parental genes causing the body to produce abnormal hemoglobin.
Advertisement

The skull fragment identified is thought to belong to a child somewhat younger than two and shows bone lesions that commonly result from a lack of B-vitamins in the diet.


Previous reports have shown that early hominids ate meat, but whether it was a regular part of their diet or only consumed sporadically was not certain.

Scientists have finally solved the mystery, why people with a hereditary mutation of the red blood pigment haemoglobin, do not contract severe malaria?
Advertisement
The authors of the new study suggest that the bone lesions present in this skull fragment provide support for the idea that meat-eating was common enough that not consuming it could lead to anaemia.

Nutritional deficiencies like anaemia are most common at weaning, when children's diets change drastically.

The authors suggest that the child may have died at a period when he or she was starting to eat solid foods lacking meat. Alternatively, if the child still depended on the mother's milk, the mother may have been nutritionally deficient for lack of meat.

According to the authors, both cases imply that "early humans were hunters, and had a physiology adapted to regular meat consumption at least 1.5 million years ago."

The study has been published in the journal PLOS ONE.

A reduction in the number of the bone marrow cells that go on to form the different cell types present in blood leads to a condition called aplastic anemia.
Advertisement
<< 'Lab on a Chip' Devices Brought Closer to Reality By Acoust...
Discrimination from One's Manager 'Depresses' Mental Health... >>

Malaria, Anaemia Risk in Some Kids Increases With Prenatal Exposure to Malaria