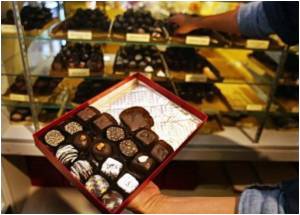 Scientists have improved the methods that are involved in determining the amounts of flavanol antioxidant in cocoa and chocolate.

Scientists at Planta Analytica (Danbury, CT) isolated and separated cocoa flavanol antioxidants on a large scale. The Hershey scientists and collaborating scientists at the Pennsylvania State University-M.S. Hershey Medical Center (Hershey, PA) teamed up to determine the purity of these flavanols by HPLC and by Matrix Assisted Laser Desorption Ionization Time of Flight (MALDI-TOF) mass spectroscopy. The isolated compounds were then used as standards in the determination of flavanol cocoa antioxidants in a cocoa powder and a dark chocolate.The research, sponsored by The Hershey Center for Health and Nutrition, was a collaboration between scientists at The Hershey Company and other scientific laboratories.

Cocoa Flavanols may be Good for Cardiovascular Patients

"We believe this represents the first large scale purification of standards for flavanol antioxidant determination" said Dr. Jeffrey Hurst of the Hershey Center for Health and Nutrition. "Prior to this, only dimers were commercially available. With a full series of standards, our flavanol determinations are not only more accurate, but the values are much higher, between 40% to 100% higher, than previously published methods using proprietary standards." This also means that standards are commercially available to various laboratories. This collaborative work was published in the online journal


In other research published in the Journal Association of Official Analytical Chemists, scientists from The Hershey Company and Brunswick Laboratories (Newton, MA) reported on the development of a new method for determining total procyanidins. This method is a colorimetric test based on the specific reaction of dimethylaminocinnamaldehyde (DMAC) with flavanols. The method measures flavanol monomers, including EGCG, as well as higher flavanol polymers. The method which is standardized using a commercially available flavanol dimer, was validated at two Brunswick Laboratories facilities and at Hershey with all three laboratories providing comparable results at the 95% confidence level. "The specific reaction of DMAC with the flavanols has been known since the 1950s. This method is a simple and quick way to measure total procyanidins in cocoa and chocolate" said Dr. Mark Payne of the Hershey Center for Health and Nutrition. "Compared to the HPLC method, which separates individual compounds, this method gives one number, which importantly includes polymers of flavanols beyond ten."

Research indicates that the public release of the genome of the cacao tree will not only ensure that the chocolate industry is saved, but also that it would a lot more tastier and healthier.
Advertisement
"These reports are part of an ongoing series of publications, by Hershey and its collaborators, designed to improve upon the methods to determine flavanol antioxidants from cocoa and chocolate," said Dr. David Stuart, of the Hershey Center for Health and Nutrition. "We want to make these methods generally available to the chocolate industry initially, with the intent of having uniformly agreed upon methods of determining the level of these important molecules."

These new methods can be used in research and other applications involving dietary intake of cocoa and chocolate, clinical interventions and food standardization".
Source: Eurekalert

If you want to keep your true love's heart beating strong, then go for dark chocolate and red wine instead of oysters and champagne this Valentine's Day.
Advertisement
Advertisement