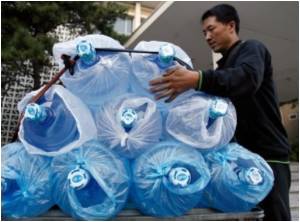 Treated water could be a major obsession with the middle classes the world over. But now Australian research shows that "free-living amoebae" regularly bypass treatment systems in municipal water supplies. Worse, they tend to multiply at end-use points such as taps, shower heads and water tanks.

While some species of free-living amoebae can occasionally cause serious illnesses, of greater concern is the fact that amoebae can carry bacteria, such as Legionella and Mycobacterium, which can cause the potentially fatal respiratory illness known as community-acquired pneumonia (CAP). Young children and the elderly are most susceptible to CAP.

Interestingly, a sample of desalinated water showed no sign of amoebae, suggesting desalination may have a role in future treatments.

Desalination - A Solution to Water Needs

Desalination is a viable solution to the drinking water shortage the world over. India has taken a few good strides towards this end.
Advertisement
In a review of 26 Australian and international studies the researchers found free-living amoebae existed in about 45 per cent of post-treatment water samples reported.

"These amoebae are found in treated drinking water systems around the world and present an emerging health risk, although it is one that has not yet been quantified" Ms Thomas said.

The paper was published in the journal Environmental Science and Technology and reported on by the Sydney Morning Herald.

Amoebae and the bacteria they carry are able to cause infection through inhalation of aerosol water droplets and are of increasing concern to health authorities internationally, particularly in developed nations where populations are ageing. Legionella bacteria have been identified as the third most common cause of waterborne disease outbreaks in the United States since 2001.

Ms Thomas said free-living amoebae had been shown to be able to pass through water treatment systems and in the process protect any potential Legionella or Mycobacterium within them. These bacteria are then able to increase in both number and infectivity, posing an increased health risk for water users.

"The disease burden caused by exposure to drinking water carrying these amoebae and bacteria could be much larger than we realise, as sources of community-acquired pneumonia infections are rarely identified," Ms Thomas said.

"More research is urgently required before accurate risks assessments can be undertaken to assess the impacts on human health - in households and institutions - of exposure to these amoebae that carry bacteria.

"The study also raises the question over where treatment of water supplies should be focused - at the start of the distribution systems or in premises."


The Water Research Centre is within the School of Civil and Environmental Engineering.

World Water Day is celebrated annually on March 22nd in order to focus international attention on the importance of preserving freshwater resources.
Advertisement
<< Students Fare Better When Online Trainers Look Like Them
Doctors Must Become More Familiar With Alternative Medicin... >>