Impact of Warming To Be Measured By 'Blood Test' for Corals 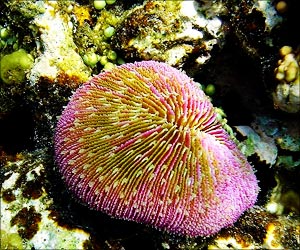 A "blood test" for corals to measure how they are being affected by climate change and human activity is being developed by researchers.

They found hemoglobin genes in the microalgae which live symbiotically with corals, which may provide a readout on how stressed a particular coral is - and how likely it is to bleach and die.

Hemoglobin is the red material that carries oxygen around the body in our blood supply, but in plants and algae it mops up spare oxygen and toxic gases before these harm the plant.


In corals and their algae, it may also form a vital part of the day-night energy storage system, the journal Ecology and Evolution reports.

"When the corals undergo temperature stress, this system goes into overdrive and hemoglobin genes are expressed at a higher level," says Nela Rosic of The University of Queensland, who led the study.
Advertisement
"Due to its sensitive nature, hemoglobin has the potential to be used as a stress biomarker. This, for the first time, gives us a clear readout of stress levels in the corals and their symbiotic algae," Rosic explains, according to a Queensland statement.

Coral bleaching occurs when the symbiotic algae abandon the coral due to higher water temperatures or pollution and, deprived of their main energy source, the corals whiten and potentially perish.

"Despite the importance of coral reefs to hundreds of millions of people worldwide, we still do not clearly understand how well they can cope with changed conditions of climate and the environment they now face," explained study co-author Ove Hoegh-Guldberg, professor at the ARC Centre of Excellence for Coral Reef Studies (CoECRS).

Bleaching has hit more than half of the Great Barrier Reef in recent years, as well as a majority of coral reefs around the world.

Corals may Quit Warming Oceans: Marine Scientists
According to new evidence unearthed by marine scientists, corals could quit equitorial seas as the ....

Too Many Symbiotic Algae Make Corals More Vulnerable to Bleaching: Study
A new study reveals that corals may be more severely impacted by climate warming when they contain ....