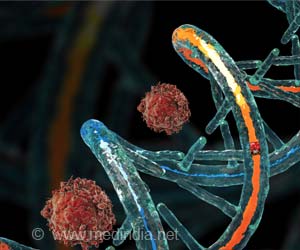 Immunotherapy found to treat bowel cancer patients who are not responding to commonly used targeted drugs, according to a new study.

Scientists found that bowel tumours which had initially responded to cetuximab before developing resistance became more visible to the immune system - potentially leaving them vulnerable to immunotherapies.

Learn all about the early signs, symptoms, prevention and treatment of small intestine cancer.
Advertisement
‘Anti-evolution treatment is the need of the hour for resistant bowel tumors, as they are constantly evolving and adapting.’
Read More..

A phase II clinical trial has already begun to test the possible benefit of immunotherapy in patients who have stopped responding to cetuximab.


A team at The Institute of Cancer Research, London, and The Royal Marsden NHS Foundation Trust teased out the various complex mechanisms by which bowel cancers became resistant to cetuximab. Their study could not only lead to new approaches to treatment but also to tests to assess which patients are likely to develop resistance to cetuximab most rapidly.
Advertisement
The research is published in the prestigious journal cancer cell and was largely funded by Cancer Research UK, with additional support from the NIHR Biomedical Research Centre at The Institute of Cancer Research (ICR) and The Royal Marsden.

The researchers studied tumour samples from 35 people with advanced bowel cancer who were treated as part of a clinical trial of cetuximab led by the ICR and The Royal Marsden.

Cetuximab is effective for some people with advanced bowel cancer - but the treatment only works in around half of patients, and most will eventually stop responding as their cancer becomes drug resistant. Once bowel tumours evolve to become resistant to cetuximab, patients have very limited treatment options, and new therapies are desperately needed.

The new study offers a detailed picture of the many different ways in which bowel cancers can evade treatment with cetuximab either from the outset or through acquired drug resistance.

Surprisingly, the researchers were only able to find genetic changes that could explain the development of drug resistance in 36 per cent of the tumours they studied.

But in five out of seven patients who had stopped responding to cetuximab, tumours had become heavily infiltrated by non-cancerous cells from supportive tissue around the tumour, which nurtured the cancer cells and helped them to grow during treatment.

This finding adds to our understanding of the complex nature of cancer evolution, in which tumours often adopt genetic strategies to evade treatment or change their environment as a non-genetic approach to developing drug resistance.

The research team then studied the different types of immune cells in tumour samples before and after treatment with cetuximab, in an effort to find new ways to tackle drug-resistant cancers.

The researchers found that on average, cancer-killing immune cells were six times more active in tumours that had become resistant to cetuximab than those that had not responded to the drug from the outset.

The researchers believe that cetuximab kills cancer cells in a way that sends signals that attract immune cells to the tumour - and their findings suggest that immunotherapies designed to take the brakes off the immune system could be effective in these cancers.

Researchers at the ICR and The Royal Marsden have now begun a phase II clinical trial of a combination of two immunotherapy drugs, nivolumab and relatlimab, in patients with advanced bowel cancer whose tumours have stopped responding to a combination of cetuximab and chemotherapy.

The new study also identified six new genetic mechanisms that can cause cetuximab resistance in patients. These findings could lead to the development of better tests to pick out patients who will either not respond to cetuximab from the outset or will rapidly stop responding - so they can be identified early and where possible switched to alternative treatments.

The ICR - a charity and research institute - is raising the final £15 million of a £75 million investment in a new Centre for Cancer Drug Discovery to house the research programme, which aims to create a new generation of 'anti-evolution' treatments.

"In our new study, we have shone a light on the complex biology that lies behind the ability of bowel cancers to evade treatment with the targeted drug, cetuximab.

"Most bowel cancers are 'immune deserts' - so it's enormously exciting to see that cetuximab attracts immune cells into these tumours. At the ICR and The Royal Marsden, we have already started a clinical trial of immunotherapy in people whose bowel tumours have become resistant to cetuximab and chemotherapy. I'm eager to see if immunotherapy can unleash the immune cells and shrink these tumours.

"Our findings could also lead to better tests so that people with changes in their tumours that mean they're unlikely to respond to cetuximab - or likely to stop responding - could be spared unnecessary treatment."

"This research underlines the importance of understanding how cancer evolves, especially when it occurs as a direct effect of treatment. In this study the antibody cetuximab made colorectal cancer tumours potentially susceptible to immunotherapy. This finding could have implications for the treatments we provide to patients with this disease."

"Bowel cancer is the fourth most common cancer in the UK, and it's the second biggest cancer killer. Treatment resistance remains a huge part of the challenge, so it's vital that we find new ways to treat this disease. "While cetuximab works well for lots of people, most will eventually stop responding to their treatment. Delving into the mechanics of how cetuximab changes the biology of bowel tumours has given us valuable insight into what the next best treatment step could be, and we look forward to seeing the results of the trial."

Professor Sir Mel Greaves, who will be Director of Cancer Evolution within the ICR's new Centre for Cancer Drug Discovery, said: "Cancers are a moving target, constantly adapting and evolving within their environment so that they can survive, progress and evade treatment. As this intriguing study shows, cancers don't always need to accumulate genetic changes to become drug resistant - they can also modify their behaviour and their immediate environment in complex and subtle ways to render treatments ineffective.

"By unravelling the mechanisms underpinning cancer evolution and adaptation in response to drugs, our research aims to open up new treatment strategies - in this case through use of immunotherapy in bowel cancers that have become more visible to the immune system. It's an approach which lies at the heart of the ICR's pioneering plans to create a new generation of anti-evolution treatments, once we have raised the final £15 million to complete our Centre for Cancer Drug Discovery."