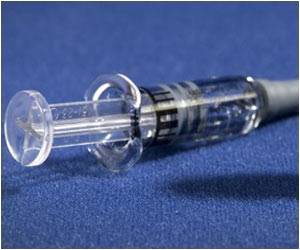 A new immunotherapy pembrolizumab was found to extend the lives of a proportion of people with advanced head and neck cancer, with some living for three years or more, a major new clinical trial reports.

Overall, the drug pembrolizumab had significant benefits for patients, with 37 per cent of patients who received it surviving for a year or more, compared with only 26.5 per cent of those on standard care.

But the results were particularly exciting among the group of people who did respond to pembrolizumab - with a median length of response of 18.4 months, compared with five months for standard care.


The large international clinical trial was led by a team at The Institute of Cancer Research, London, and The Royal Marsden NHS Foundation Trust, and involved 97 medical centres in 20 countries.
Advertisement
The trial was sponsored and funded by Merck & Co., Inc., known as MSD outside the United States and Canada, and the results are published in The Lancet today .

The drug was evaluated in a trial of nearly 500 patients with very advanced head and neck cancer that had spread around the body and had already become resistant to platinum chemotherapy, the first-line treatment for the disease. Some 247 patients were randomised to pembrolizumab and 248 to standard of care - chemotherapy or the targeted agent cetuximab.

When chemotherapy or targeted therapies stop working, treatment options for people with advanced head and neck cancer are limited, and they are normally expected to survive for less than six months.

But a minority of patients responded extremely well to pembrolizumab - 36 patients saw their cancer partially or completely disappear, and some are still cancer free three years after first receiving the drug.

Researchers at The Institute of Cancer Research (ICR) and The Royal Marsden hope pembrolizumab could be a much needed smarter, kinder treatment option for people with advanced head and neck cancer.

Pembrolizumab works by taking the brakes off the immune system's ability to attack cancer cells, and is already approved for use in some people with lung cancer, skin cancer and lymphoma. Professor Kevin Harrington, Professor of Biological Cancer Therapies at The Institute of Cancer Research, London, and Consultant at The Royal Marsden NHS Foundation Trust, said:

"Head and neck cancer is extremely hard to treat once it comes back or spreads, and the outlook for patients once other therapies have stopped working is very poor.

"Our findings show that the immunotherapy pembrolizumab extends the life of people with advanced head and neck cancer overall, and in a group of patients has really dramatic benefits. It is also a much kinder treatment than those currently approved. "I would like to see pembrolizumab approved for use in the clinic, so that people with advanced head and neck cancer can be offered the chance of a longer life and improved quality of life. There is also an urgent need to work out how we can identify in advance which patients are likely to benefit, given that some of these people may do much better than they do on standard treatment."

Professor Paul Workman, Chief Executive of The Institute of Cancer Research, London, said: "The next big challenge is to design immunotherapies that can work for many more people, so that more patients can benefit from the kinds of dramatic responses that we saw in some patients in this trial."

Derek Kitcherside, 69, is alive and well after two years of treatment on the pembrolizumab trial at The Royal Marsden NHS Foundation Trust and The Institute of Cancer Research, London. He said: "I was first diagnosed with cancer of the larynx back in 2011 but quickly went into remission after having standard treatments. I went back to enjoying my retirement, until I started having symptoms again, like coughing up blood, in January 2014. I thought it was the reoccurrence of the same cancer, but it turned out three or four tumours had spread to my right lung. I was told I had squamous cell carcinomas of the head and neck, which was inoperable and probably incurable. "The standard treatments of radiotherapy and chemotherapy weren't really doing much for me this time around. My tumours were still getting larger and I was told there wasn't much more the doctors could do.

"I was really lucky to get a place on The Royal Marsden's pembrolizumab trial and started treatment in May 2015. I travelled down from Leicester every three weeks for two years. My tumour was shrinking all the time and I felt a bit better every time I went - it made a huge difference to my life and I was able to return to normality.

"Now I have CT scans every nine weeks, which are still showing stable disease and slight tumour shrinkage each time. It's remarkable how I've responded to the drug and I don't think I'd be here without it."

Quiz on Head and Neck Cancer
Head and neck cancers begin in squamous cells that line the moist, mucosal surfaces inside the head ...

Pembrolizumab
Pembrolizumab injection is prescribed to treat different types of cancer such as  ......