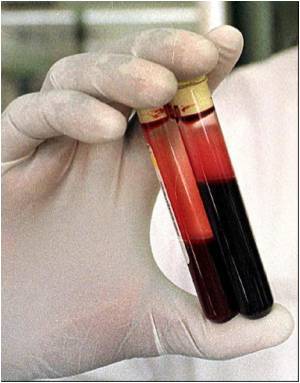 Immune-stimulating "Cocktail" peptides are believed to provoke the body's defenses to attack multiple myeloma in its early "smoldering" phase and retard or avert blood cancer. The 'cocktail' was created by Scientists at Dana-Farber Cancer Institute who created it.

Based on laboratory results (abstract 3990) being presented at the annual meeting of the American Society of Hematology Monday, Dec. 12 at 6 p.m. PST, the researchers say the immunotherapy approach merits testing in human clinical trials.

Locating sensitive nerves during a surgery may now be possible as scientists have developed injectable fluorescent peptides that cause hard-to-see peripheral nerves to glow.
Advertisement

The combination of four antigenic peptides derived from myeloma cells sparked a stronger diverse response from immune defenses in laboratory culture than any of the individual peptides, according to the team, led by first author Jooeun Bae, PhD, and senior author Nikhil Munshi, MD.


"Thus, targeting multiple myeloma-associated antigens using a cocktail of specific peptides may provide an effective therapeutic application" in patients with the blood cancer and related diseases, the authors wrote. Multiple myeloma, in which abnormal blood cells accumulate in bones and other organs, causing life-threatening malfunctions, will be diagnosed in about 20,520 Americans in 2011, according to American Cancer Society estimates, and there will be some 10,610 deaths.

Acute myeloid Leukemia, more popularly known by its abbreviated form AML, is a fast- evolving leukemia that affects both children and adults alike
Advertisement
Immunotherapy - getting the body's immune system to recognize cancer cells as "foreign" and then unleash a defensive reaction against them - has proven difficult in multiple myeloma. This type of therapy, also referred to as "cancer vaccines," relies on using a peptide - a piece of a protein from the myeloma cell itself -to spark an immune response.

But multiple myeloma, like many cancers, is a shape-shifting foe: Its tumor-associated antigens can appear and disappear, or undergo mutations that change their identity sufficiently to escape immune detection. For this reason, explained Munshi, previous efforts using a single myeloma antigen have failed to elicit effective immune responses against the disease.In the new study, the Dana-Farber scientists reasoned that challenging the immune system with not just one, but several myeloma antigens would stand a better chance of prompting a strong reaction. So they identified four antigenic myeloma peptides and tested the ability of each of them to stir a reaction by immune T-cells in a laboratory dish.

Next, the researchers combined all four myeloma peptides into a cocktail: The combination prompted a greater multi-target defensive response against myeloma cells than any of the individual peptides.

Because the myeloma antigens they are studying are derived from human cells, the concept cannot be tested in animals, Munshi says, and therefore the next step will be to administer them in a clinical trial to patients with an early, or "smoldering," form of the blood cancer for which they are not receiving any treatment.

"Some of these patients won't develop the full-blown disease, or won't develop it for several years," Munshi explains. "We would like to find out if giving this peptide cocktail might prevent them from progressing.

"This is an exciting possibility," Munshi adds, "because these patients have good immune systems, and currently there's nothing we can do for them."

Acute lymphoblastic leukemia (ALL) is the cancer of white blood cells characterized by excess lymphoblasts. It is the most common of all childhood cancers and can be fatal in weeks if left untreated.
Advertisement
<< Low Carb Diet Promotes Weight Loss
Big Birds Get Bloodless Erections >>