Immediate Health Declines Among Mexicans Due to Migrating North 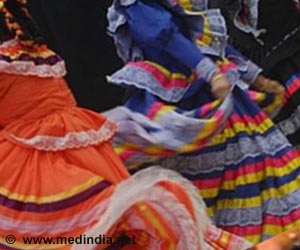 Barriers like poorly paying jobs, crowded housing and family separation are often faced by Mexican immigrants who relocate to the United States. Such obstacles - including the migration process itself - may be detrimental to the health of Mexican immigrants, especially those who have recently moved.

A study led by Princeton University's Woodrow Wilson School of Public and International Affairs finds that Mexican immigrants who relocate to the United States are more likely to experience declines in health within a short time period compared with other Mexicans.

Capsaicin has been studied for various medicinal properties including anti-coagulant effects. Chilli peppers and capsicums are rich in vitamin A, C and potassium and are extremely low on calories.
Advertisement

While past studies have attempted to examine the consequences of immigration for a person's health, few have had adequate data to compare recent Mexican immigrants, those who moved years ago and individuals who never left Mexico. Published in the journal Demography, the Princeton-led study is one of the first to examine self-reported health at two stages among these groups.


"Our study demonstrates that declines in health appear quickly after migrants' arrival in the United States," said Goldman, lead author and professor of demography and public affairs at the Wilson School and faculty associate at the Wilson School's Office of Population Research (OPR). "Overall, we find that recent Mexican migrants are more likely to experience rapid changes in health, both good and bad, than the other groups. The deterioration in health within a year or two of migration far outweigh the improvements."

Anabolic steroids can produce power- packed, adrenaline - pumping performances but they also reflect a saga of condemnation and shame.
Advertisement
For the study, the researchers used data from the Mexican Family Life Survey, a longitudinal survey containing demographic and health information on nearly 20,000 Mexicans who were 20 years or older at the time of the first interview in 2002. Follow-up interviews took place in 2005-06 with individuals who stayed in Mexico as well as with those who moved to the United States between 2002 and 2005. Goldman and her collaborators based their analysis on a sample of 14,257 adults, excluding those who didn't report health conditions at the follow-up interview.

In order to assess whether migrants from Mexico to the United States experienced changes in their health after they moved, the researchers used two health assessments: self-rated health (compared to someone of the same age and sex) at each of the two interviews and perceived change in health at the second interview. The latter measure was based on the following question: "Comparing your health to a year ago, would you say your health is much better, better, the same, worse or much worse?" Goldman and her collaborators narrowed the original five response categories to three: better, worse or the same. Changes in health for Mexicans who migrated between 2002 to 2005 were compared with those of migrants from earlier time periods and with people who remained in Mexico.

The researchers also took health measures at the first wave into account: obesity, anemia, hypertension - which were all determined by at-home visits by trained health workers - and hospitalization within the past year. They also controlled for socioeconomic factors - years of schooling and household spending. Additionally, they included data from 136 municipalities in Mexico (as past research has found that migration decisions can differ based on place of origin.)

Using statistical models, the researchers analyzed changes in health status. The two health measures revealed that recent migrants to the United States were more apt to experience both improvements and declines in their health than either earlier migrants or non-migrants. However, the overall net change was a substantial deterioration in the health of recent migrants relative to the other groups. The health of recent migrants was about 60 percent more likely to have worsened within a one- or two-year period than that of those who never left Mexico.

"The speed of the health decline for recent migrants suggests that the process of border crossing for both documented and undocumented immigrants combined with the physical and psychological costs of finding work, crowded housing, limited access to health care in the United States and isolation from family members can result in rapid deterioration of immigrants' physical and mental well being," said Goldman.

"Immigrants are often assumed to be resilient and in good health because they have not yet adopted unhealthy American behaviors like poor diet and a sedentary lifestyle," said co-author Anne Pebley from the California Center for Population Research at the University of California, Los Angeles. "But these results suggest that the image of the 'healthy migrant' is an illusion - at least for many recent immigrants."

"These results demonstrate the high personal costs that many immigrants are willing to pay for a chance to improve their lives," said Goldman. "From a humanitarian standpoint, the health declines underscore the need for public health, social service and immigration agencies to provide basic services for physical and psychological health to recent migrants."

Given the limitations of the dataset, Goldman and her collaborators could not provide a more nuanced analysis regarding the causes of the changes in health status, but, with the availability of the third wave of data (collected between 2009-12), many of these questions can be later addressed.

Surmise a teen bound to college heads off for a game of soccer much to the dismay of parents complaining about it; the more physically active the teen is, the more the parents repel it.
Advertisement
News A-Z
A B C D E F G H I J K L M N O P Q R S T U V W X Y Z
What's New on Medindia

Health Insurance - India
News Archive
News Resource
Advertisement
News Category
Tale of Love Hormones Shaping Our Responses to the Society How to Reduce Needle Anxiety in Children? Tobacco Addiction: Here's How to Break the Habit Parents are 'Winging It' on Their Kids' Mobile Use Ankle and Ankle Movements While Riding an Hoverboard
More News
Sign up for Wellness Consult a Doctor Sign up for Selfcare