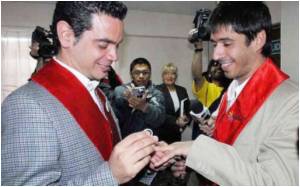 "What we're celebrating today is the triumph of democracy, the triumph of liberty," Governor Pat Quinn said as he prepared to sign the bill into law on a desk used by President Abraham Lincoln, who hailed from Illinois.

"Part of our unfinished business is to help the rest of America achieve marriage equality," Quinn said at an hour-long bill signing ceremony attended by around 3,000 cheering people.


Marriage laws are governed by individual US states, 29 of which have amended their constitutions to ban same-sex marriage.

Efforts to give same-sex couples the same rights as heterosexuals have gathered steam in recent years.
Advertisement
Perhaps one of the most important victories was when the US Supreme Court in June struck down the Defense of Marriage Act, which defined marriage as between one man and one woman.

As a result, the federal government was allowed to recognize same-sex couples in all federal matters, such as sharing pension benefits.

The 2012 elections were considered a sea change for the matter.

The Illinois bill is set to go in effect on June 1, 2014. The Midwestern state is the 5th largest state in the nation with a population of 13 million people.

Croatia to Hold Referendum on Gay Marriage in December
Croatia lawmakers revealed that the country will be holding a referendum on December 1 to decide ......

French Court Allows Franco-Moroccan Gay Marriage
Going against a government ruling that homosexuals from Morocco and 10 other countries cannot tie .....