A molecule that exhibits antiviral activity against the chikungunya virus, raising hopes of finding a new way to combat the mosquito-borne viral disease, reveal scientists at the Indian Institute of Technology-Roorkee.

Chikungunya causes severe fever and joint pain. At present, there are no drugs or vaccine available in the market to treat it.

The antiviral activity achieved around 99 per cent reduction in the virus, said the study published in the journal Biochimie.


‘Indian researchers from the Indian Institute of Technology-Roorkee have identified a new molecule that could combat chikungunya.’

Out of the two molecules, the researchers found PeP-I to be more effective as an antiviral molecule.

"The nsP2 protease is a strict viral enzyme, meaning it is absent in humans, and thus, is an excellent antiviral drug target for chikungunya virus," said lead researcher Shailly Tomar, Professor at IIT-Roorkee's Department of Biotechnology.

"Our research group has targeted nsP2 using biochemical and structure-based approach. We identified a molecule that not only possesses anti-nsP2 activity but also effectively kills the chikungunya virus in the cell based assays," Tomar said in a statement.

One of the two molecules -- Pep-I -- has higher antiviral activity against chikungunya virus. The PeP-I molecule inhibits the enzymatic activity of nsP2 viral protein and in cell based assay proved to be an effective antiviral molecule.

"Derivatives of PeP-I and PeP-I like molecules are being developed that will be tested for their antiviral potential in animal model," Tomar said.

According to the researchers, any molecule that inhibits nsP2 protease should possess antiviral activity.

To test the hypothesis they carried out antiviral studies using cell lines.

The Pep-II molecule showed reduced antiviral activity of only 50 per cent even at a higher concentration, the study said.

"Out of the two molecules, PeP-I is more effective as an antiviral molecule as no virus was detected in cultured cells at concentration as low as 10 mM (microMolar)," study co-author Rajat Mudgal from IIT-Roorkee said. 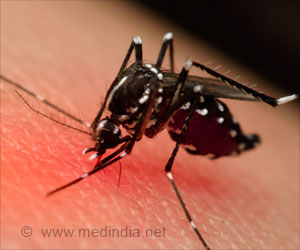 New Insights on Chikungunya Virus and Chronic Joint Pain
One fourth of the patients infected with chikungunya have chronic joint pain. However, the virus was not detected in the joints after 22 months of infection.
READ MORE

Delhi Has Reported 3,829 and 502 Cases Of Dengue and Chikungunya So Far
Delhi has so far recorded 3,829 cases of dengue and 502 cases of chikungunya, according to civic agencies on Monday.
READ MORE

Smartphone-pocket Device To Detect Zika, Dengue, Chikungunya
The tool is a smartphone-integrated system that can diagnose more than one infection with a droplet of whole blood.
READ MORE