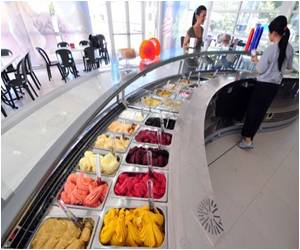 Thanks to the new rules introduced by the country's health and safety bosses the familiar jingle of an ice cream van in the streets of Britain may soon be a thing of the past.

Ice cream maker Joe Delucci's revealed that there are now less than 500 mobile vans on Britain's streets compared to 250,000 in the 1970s.

Ice-cream Thats Good for Your Heart

The universally loved Ice-cream is undergoing an image makeover.
Advertisement

According to the Daily Express, councils put the sellers into meltdown by creating zones where they cannot go at all.


Ice cream men still peddling their 99s have seen licence costs soar. And some areas have put limits on how long vans can sound their chimes, the report said.

It's another triumph for brand Amul. After emerging as India's topmost brand for dairy products, it has gone to win one of the world's most prestigious awards
Advertisement
The report cited an example of the Peterborough City Council, which said ice cream van owners can only play their jingles for four seconds.

According to the report, one of the major factors in their demise is the parents' reluctance to let their children play in the streets due to security issues.

"It wouldn't happen today, not least because parents don't allow children out on the streets on their own because they worry for their safety," said Joe Delucci's co-founder Nigel Langstone.

"Councils have banned ice cream vans from so many of our estates. They are an easy target in the war on obesity," Langstone added.

According to the report, the UK still has 5,000 vans, but almost all are static, parked at seaside resorts and next to play areas, with just 500 left patrolling the streets.