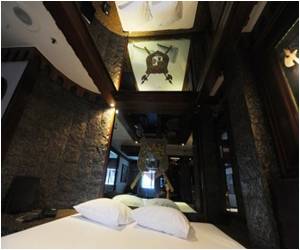 Neymar, an icon where he grew up, inspires as a role model and is on whom the Brazilian relies in chasing a sixth World Cup triumph.

The star's face beams out from a huge poster advertising a housing project not far from the Instituto Neymar Jr foundation in the port city of Santos, where he made his name in the Brazilian league before Barcelona lured him away last year.

An international research team has identified a new superbug that caused a bloodstream infection in a Brazilian patient.
Advertisement

In the district where he grew up and which remains home to his grandmother, children play football on the same turf where the star used to play as a 10-year-old and where locals know him as "a simple, nice guy."

Santos' Vila Belmiro stadium, where Neymar made his name before heading off to Barcelona, hosts a memorial to its former stars, including O Rei (the King) himself, Pele, though Neymar has a trophy space of his own.

A new superbug has been identified by a team of researchers that has caused bloodstream infection in a Brazilian patient
Advertisement
"Neymar has always taken great delight in playing football," says Jose Alexandre Cardozo, coordinator of Santos' indoor football, or futsal, team where Neymar showed early promise before coming through the ranks to make the first team.

"From when he was very small he showed impressive technique," Cardozo, 42, told AFP.

"He developed both feet with the same expertise, plus he had the ability to take decisions in an instant to play at speed."

Cardozo recalled how Neymar, hailing from a family of modest means, first came to train with Santos, who looked after him and ensured the prodigy had enough to eat.

"Neymar played football in this street," a neighbour of the starlet's paternal grandmother told AFP in Sao Vicente.

"Now he is famous I don't see him as often as before -- but he remains a simple, nice guy."

The family home at Nautica 3 in a modest part of town lies behind an enormous gate and is protected by closed circuit television cameras.

Neymar has not forgotten his roots, providing financial assistance to his family's local Baptist church in Sao Vicente.

"He is very generous," says pastor Nilton Lobato. "He is a God-fearing child."

From Sao Vicente, Neymar's parents moved to the neighbouring area of Praia Grande, where the Instituto Neymar Jr will soon provide some 2,500 children with activities including football coaching.

"As with all Brazilian suburbs there is delinquency and a lack of infrastructure and opportunity with poor education," Da Silva told AFP.

"My nephew wanted to do something for local people where he lived."

The project was launched three years ago and Da Silva hopes Neymar will be able to inaugurate it ahead of the World Cup.

Of 10 players taking part in an under-15 futsal match at Sao Vicente on a pitch belonging to local club Gremetal, no less than eight sport the mohawk hairstyle Neymar himself adopted prior to his arrival at Barcelona.

"He is absolutely a role model for me, an inspiration. His game is joyous and provocative; he's my idol," said Leonardo Costa, 15, as he prepared to play.

"I want to be like him," said 14-year-old Anderson Silva.

"He is skilful and quick and he has a great story: He was very poor and he got to where he is now. For me, he is an example to follow."

Brazil has transformed itself on many levels to become the world's seventh-largest economy since it last hosted the World Cup in 1950.
Advertisement
<< Now You can Walk With Dinosaurs in Turkmenistan's 'Jurassic...
Endogenous Dendritic Cell-derived Interleukin-27 Might Prom... >>

Selfie Addiction Calculator Turmeric Powder - Health Benefits, Uses & Side Effects The Essence of Yoga Drug Interaction Checker Drug Side Effects Calculator Hearing Loss Calculator Color Blindness Calculator How to Reduce School Bag Weight - Simple Tips Sanatogen Indian Medical Journals
This site uses cookies to deliver our services. By using our site, you acknowledge that you have read and understand our Cookie Policy, Privacy Policy, and our Terms of Use