I Will Draw Inspiration from Armstrong in Battling Illness: Yuvi 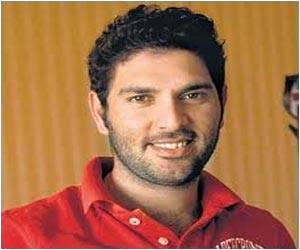 Star cricketer Yuvraj Singh has said that he will draw inspiration from cycling champion Lance Armstrong to battle his lung tumour.

He is now in the US undergoing treatment.

According to the Gulf News, Singh's much-anticipated return to cricket will hence be delayed further.


Even though he exuded confidence after the game, the national selectors did not want to "rush" him into a comeback for the One-day series in Australia while he has been also ruled out of the Asia Cup (March) and the Indian Premier League (IPL) in April-May.
Advertisement
According to reports in the Indian media, he is currently consulting oncologists in the US and there is growing speculation about the possibilities of surgery to remove the non-malignant growth, which is located between the lung and the heart.

Yuvraj, however, said that it was not true that he was undergoing surgery, and was only receiving medication.

Armstrong is a seven-time Tour de France winner and is a cancer survivor.

Yuvraj said that he was reading Armstrong's book-It's Not About the Bike: My Journey Back to Life and hoped to be motivated enough to pull through is current illness.

The Indian Cricket Board, which has been footing the bills for his treatment, has rallied round him well - saying they are willing to bid their time for a fully fit Yuvraj Singh.

Members of the Sahara Pune Warriors team, whom he captained in the IPL last season, reveal he is "much better now" when Gulf News contacted to check on his well being.