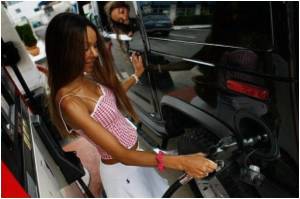 Empa has investigated the CO2 emission behaviour of current hybrid cars, as part of a study undertaken on behalf of the Swiss Federal Office for the Environment (FOEN).


When driven in rural areas, both types do equally well. Under mixed conditions (that is real, everyday driving) vehicles based on both concepts offer reductions of up to 25 per cent in CO2 emissions compared to conventional gasoline fuelled automobiles.

Hybrid drive systems and natural gas engines therefore represent an important technical measure for reducing CO2 emissions which can be put to use immediately, as do vehicles powered by renewable fuels such as biogas and ethanol derived from waste matter.

The fuel usage characteristics were measured on a dynamometer, both for the standard driving cycle as well as for "real world" driving profiles, which better simulate everyday driving under inner city, rural and motorway conditions.

In addition, the researchers measured the amount of energy returned to the storage batteries during regenerative braking (known as recuperation) and the current supplied by the batteries to deliver extra torque to the engine when necessary.

The comparison with conventional gasoline engined cars showed that hybrids achieve up to twice the efficiency in city driving, which naturally has a very positive effect on their fuel consumption and CO2 emission levels.

Eco-friendly Vehicles Rally Held in Delhi
A first-ever rally of eco-friendly vehicles with the theme 'Save the Earth' was hosted in the national capital on Sunday.
READ MORE

People Driving Ford Most Likely to Throw Litter: Survey
People behind the wheels of Ford are most likely to throw litter from their vehicles in the UK, suggests a survey.
READ MORE