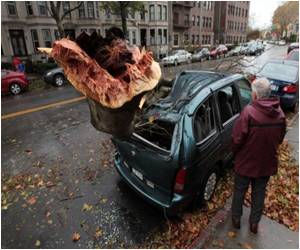 Hurricane Sandy is the year's second most talked about topic on Facebook.

Using laptops, tablets and smartphones and juicing up their battery powered devices wherever they could, people are turning to Facebook to let their family and friends know that they survived the storm.

New York's annual Halloween parade planned for Wednesday, was called off by organizers because of superstorm Sandy that played havoc in the US.
Advertisement

As of 10 a.m. Tuesday, the most-shared term by US users was "We are OK". Other top shared words and phrases included references to electrical power, damage and trees, and terms such as "made it", "safe" and "thankful".


At its peak Monday, Sandy scored an 8.34 on Facebook's "Talk Meter", which measures chatter about a news event on a scale of 1 to 10 when compared with a baseline, CNN reported citing data provided by the social network.

Social Media Shows Its Active Side To Face Hurricane Sandy

As Americans hunkered down for Hurricane Sandy, locating the nearest emergency shelter or chatting live with forecasters -- social networks were abuzz with the latest news, tips and reassurance.
Advertisement
So far in 2012, Sandy trails only the Super Bowl between the New England Patriots and the New York Giants, which earned an 8.62 in February.

Facebook's data show that men and women are talking about the storm in equal numbers and that older users -- those over 55 -- are chatting more about Sandy than younger ones.

Although Sandy made landfall in New Jersey, that state did not have the highest rate of chatter about the storm. That honour went to Connecticut, with New Jersey a close second.

Destructive Power of Hurricanes Could Be Reduced By Cloud Seeding

The hurricanes are one of the most destructive forces of nature on Earth.
Advertisement
<< Probiotics Effective in Treating Symptoms of Common Cold
Drug-resistant Malaria Spreading in Asia >>

After Earthquake and Cholera-Oubreak, Haiti Braces for Hurricane and Floods