Hunt on for Missing 'Centenarians' in Japan 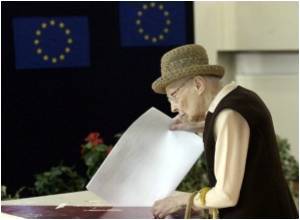 A frantic search is on in Japan for other listed centenarians following the discovery of the mummified remains of a man supposedly aged 111.

Local government officials have fanned out for face-to-face meetings with people registered as aged over 100 -- of whom fast-greying Japan, with its world-beating life expectancies, had more than 40,000 at last count.

An insight into the health insurance schemes and policies as promoted by the Government.
Advertisement

The latest missing-elderly case to shock the nation was that of 113-year-old Fusa Furuya, who was believed to be Tokyo's oldest woman until her estranged children told authorities this week they hadn't seen her in decades.


Newspapers have started their own national headcounts, with the Asahi Shimbun identifying 12 people over 100 who are unaccounted for, the Yomiuri naming 15, and the Mainichi daily reporting 18 missing across Japan.

This policy has been designed to cater to the needs of Senior Citizens. It covers Hospitalization and Domiciliary Hospitalization Expenses under Section I as well as expenses for treatment of Critical Illnesses, if opted for, under Section II.
Advertisement
Just in Tokyo, where some 2,500 centenarians are registered, the whereabouts of nine people aged 102 or older are unknown, reports said.

The media frenzy started last week after a visit by ward officials to the house of a Tokyo man believed to be 111 led to a police search that found his three-decade-old skeleton in his bed, in a room where the latest newspaper was from 1978.

Police are investigating the late Sogen Kato's relatives -- who claimed he had retreated to his room to become "a living Buddha" -- for fraud because the government had kept paying a pension into the man's bank account.

A total of 9.5 million yen (109,000 dollars) in widower's pension payments had been deposited since his wife died six years ago, and some of the money had recently been withdrawn, reports said.

Japanese are asking how the system can allow people to vanish, apparently without anyone noticing.

The Japanese government leaves it up to local communities and independent healthcare bodies to check up on centenarians, and methods differ from one municipality to another, said a health ministry official.

"In a small town, it's easier to check up on the safety of centenarians by visiting them. But in a larger city, officials may just give a quick telephone call to family members who will confirm that the centenarians are alive," the official said.

In Tokyo, ward offices said it can be difficult to check on the elderly because relatives sometimes refuse to cooperate and prevent welfare workers from entering homes, according to a survey by the Yomiuri daily.

The capital's Itabashi ward said that a social worker had made repeat visits to a female centenarian but was turned away every time by relatives, who said she "had difficulty coming out," the daily said.

Japan has a tradition of giving birthday gifts to centenarians, but often the presents are handed to family members, and workers are unable to confirm whether or not the elderly person has received them.

The cases also highlight a growing trend in which many children hole up in their parents' homes well into adulthood and often without working, a cohort unkindly dubbed "parasaito" in Japan.

"There is a growing number of households in Japan where jobless children live with their parents and therefore depend on their pensions," said Shukutoku University's professor Yasuhiro Yuuki, an expert on social welfare.

"Depending on their parents' pension plan, the children can get quite a lot of money, or enough to survive on. Children say they are taking care of their parents, but actually they are just using their pensions."