Human Vulnerability to Climate Change To Be Charted Soon 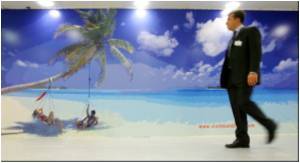 First global map has suggested that climate change will have greatest impact on the population least responsible for causing the problem.

Researchers already study how various species of plants and animals migrate in response to climate change.

Now, Jason Samson of the McGill University's Department of Natural Resource Sciences has taken the innovative step of using the same analytic tools to measure the impact of climate change on human populations.


Samson and fellow researchers combined climate change data with censuses covering close to 97 per-cent of the world's population in order to forecast potential changes in local populations for 2050.

Climate Change Litigation: Can Court Rulings Do What Legislation Cannot?

From being a marginal and even mocked issue, climate-change litigation is fast emerging as a new frontier of law where some believe hundreds of billions of dollars are at stake.
Advertisement
Samson's team found that if populations continue to increase at the expected rates, those who are likely to be the most vulnerable to climate change are the people living in low-latitude, hot regions of the world, places like central South America, the Arabian Peninsula and much of Africa.

In these areas, a relatively small increase in temperature will have serious consequences on a region's ability to sustain a growing population.

"It makes sense that the low latitude tropical regions should be more vulnerable because the people there already experience extremely hot conditions which make agriculture challenging. An increase in temperature over the next few decades will only make their lives more difficult in a variety of ways," said Samson.

This, however, contrasts with Samson's predictions about the impact of climate change on human populations in the high-latitude more temperate zones of the world, where the temperature change is expected to be greater.

Because the spread of human populations along with their activities are already more constrained by the cooler conditions in these regions, the researchers expect that climate change will have less of an impact on people living in these areas.

The study also pointed to clear inequities in the causes and consequences of climate change: the countries that have contributed the least to climate change, based on their average per-capita carbon dioxide emissions, are nevertheless predicted to be the most vulnerable to its impacts.

In a study it was found compressed natural gas (CNG) - a well known clean fuel has not shown a significant reduction in harmful vehicle emissions.
Advertisement
<< Britain Voted the Second Most Popular Country in the World
Women Make Their Presence Felt In Mideast Revolts >>

Drug Side Effects Calculator Drug - Food Interactions Indian Medical Journals Nutam (400mg) (Piracetam) The Essence of Yoga Daily Calorie Requirements Selfie Addiction Calculator Calculate Ideal Weight for Infants Blood Donation - Recipients Noscaphene (Noscapine)
This site uses cookies to deliver our services. By using our site, you acknowledge that you have read and understand our Cookie Policy, Privacy Policy, and our Terms of Use